The evil incarnations of Zarok's dark magic, Zombies will stop at nothing to get their next meal, and unfortunately for Dan, he is in the middle of the crowd.

These enemies are the easiest to defeat in the game, it doesn't take much to defeat them, the Small Sword and the Wooden Sword are both more than capable of taking these shamblers down in a couple of swipes. A lit torch or club can also burn them.

The only enemy you'll face in the Graveyard is the slow-witted zombie. These lumbering goons come in a variety of colours, but all act just about the same. They stumble about aimlessly until they pick up your scent and will even fall flat on their faces from time to time. A few well-placed swipes from your Small Sword will send them back to the grave.[1]

Zombies are found throughout the world of MediEvil II and are more of a nuisance than a threat. This doesn't mean you can let your guard down around them, however, as they are surprisingly fast. With each slash of your sword, you will slowly dismember them. Watch out! Even without limbs, they still try to butt heads with you.[2]

Your common or garden zombie is (to be blunt) a slow witted goon head of monumental proportions. It seems a shame to hurt such feeble minded weapon fodder, but they will likely insist on trying to bar one's progress and eat one's brains. A few well placed sword swipes are the order of the day, which should effectively teach them to mind their own business. 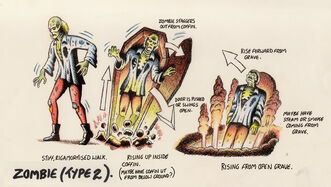 Concept art of zombies rising out of coffins. 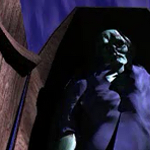 A zombie in the IntroAV

Zombies in The Graveyard level.

Daniel fighting the zombies Inside the Asylum. 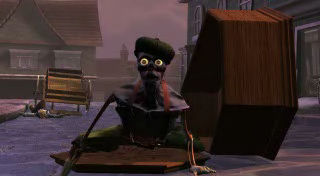 A zombie as seen in the INTROP3 FMV.

Daniel fighting the zombies in The Museum level.

A zombie from an early version of MediEvil 2.

Zombies from an early version of MediEvil 2.

Another screenshot of an early version of zombies.

Another early version of a zombie in MediEvil 2. 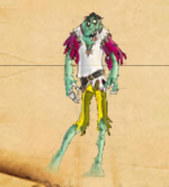 Retrieved from "https://gallowmere.fandom.com/wiki/Zombies?oldid=34412"
Community content is available under CC-BY-SA unless otherwise noted.