As you walk to the house, do not fall down into the void as that will drain your life meter.

To the left is a MERCHANT GARGOYLE. Feel free to stock up on everything. To the right is a GARGOYLE. When you are ready, enter the building.

After you enter, you find a chest on either side of you. One has a SILVER SHIELD. The other has GOOD LIGHTNING. It cannot be powered up. As you use Good Lightning, it will drain your health.

If Dan's health could use some work, walk around the outer edge of the room until you find a FOUNTAIN. This Fountain will not be there if Dan has at least four, full life bottles above the life meter. I would suggest using the Fountain up now, if possible. Using a Fountain in the middle of battle is a bit tricky. (I would more strongly suggest you come to this area with full health so this isn't an issue.)

Walk into the center of the room to use the Chalice of Souls. Then, your eight skeleton warriors will all appear.

You need to use the Good Lighting to keep your skeletons alive. When they are bright green, they are in good health. Their color will change as they are hurt with red being just before they are totally destroyed. Run around and try to keep them all alive. You cannot defeat Zarok's warriors. Your skeletons must do it.

At the end of the battle, each one of your skeletons left alive will leave behind an ENERGY VIAL. So, the most you can have is eight Energy Vials.

Then, Zarok will send out Lord Kardok. Equip the Magic Longbow. When he is riding slowly, you cannot harm him. You have to wait until he gallops at you. Then, start using the Magic Longbow. If you want to try to dodge, side to side dodging and working your way in circles seems to help. I prefer to just stand my ground and blast him with the Magic Longbow until he is, once again, dead.

Zarok will appear to be fought. I prefer to do a lot of running from him with him in view so I can see what he is doing. Remember to use the Triangle while running to do the Daring Dash for an extra burst of speed if needed. Keeping the shield out certainly does not hurt as well. If he shoots out poison, dodge forward and to the side to keep away from it. If he starts a huge fireball attack, you should be able to run and keep well ahead of it.

His underbelly is his weak point. So, you need to hit him while that is exposed. This happens when he rears up to swat at you. Start with the Spear. If you have any Magic Arrows left, use the Magic Longbow next. Then, I prefer to switch to the Magic Sword. If close fighting is too hard, then continue with distance weapons. If distance fighting is taking too long, feel free to use the Magic Sword earlier.

These are Zarok's elite skeletal warriors, trained by Lord Kardok himself!

Mortal weapons cannot hurt them. Only a hero's blow can fell such hard-boiled evil. And you, Sir Fortesque, are no hero - at least not quite yet.

The soil of the Ancient battlegrounds, made fertile by the blood of centuries, spits forth the husks of these sorry souls.

Their battle should have long since ended, and yet they still march in proud defiance of the living.

I suppose that must be why they simply try to incinerate you instead.

Zarok's Champion has charged into countless battles, equipped with nothing more than a three-string bow, a modest flail, and a legion of undead soldiers.

He's one angry guy, and frankly, it all seems to stem from that time his parents forbid him from going to clogging lessons with his sister... this is what happens, see? If he'd only been able to channel that aggression into folk-dance, we'd ALL be safe.

Psychologists all agree that the final, desperate form adopted by an on-the-ropes evil sorcerer once his minions have all been felled tells us a great deal about his particular psychosis.

What does this form tell us about Zarok? Well, I'm no psychologist, but if ever there was a clearer case of narcissistic agora-paranoid kleptomaniacal dysmorphism then... my name's not Geraldine. 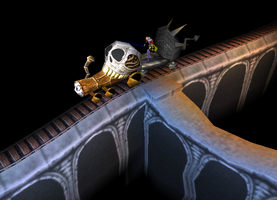 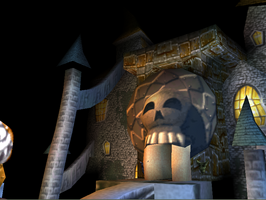 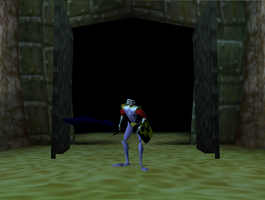 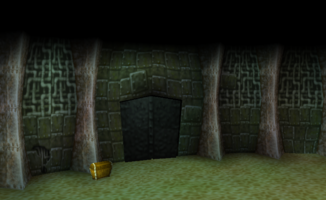 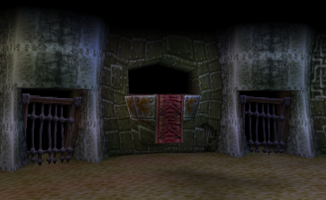 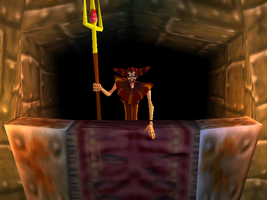 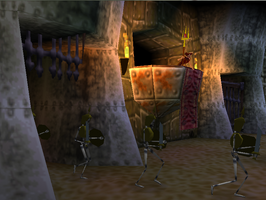 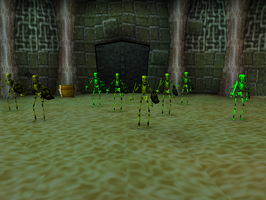 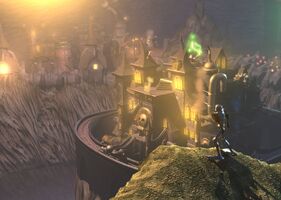 Retrieved from "https://gallowmere.fandom.com/wiki/Zarok%27s_Lair_(MediEvil)?oldid=34813"
Community content is available under CC-BY-SA unless otherwise noted.