Zarok's Beast Transformation is the form Zarok adopted in his final battle against Sir Daniel Fortesque in 1386.

After Dan defeated Zarok's Champion Lord Kardok, Zarok finally decided to fight Daniel himself. He left the room to transform into a beast. After Dan defeated him, the beast body imploded and Zarok reverted to his original form.

500 years later, a recreation of Zarok's Beast Transformation appeared in the Kensington Museum as part of the Myths & Legends exhibit.

Zarok's initial attacks are him chasing Dan around, spitting acid at him and swiping at him. He has a magical shield around him, which is disabled when he stands up on his hind legs. That's when Dan should strike. Dan should use a weapon like the Magic Sword, Dragon Armour or the Spear. Beware, though, once half of his life is diminished he'll start performing another attack which involves creating a powerful force field around him which will not only harm Dan, but will also set him on fire for a while. 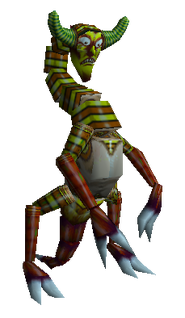 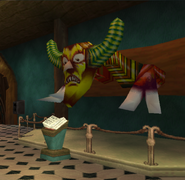 A statue of Zarok's Beast Transformation in The Museum.
Retrieved from "https://gallowmere.fandom.com/wiki/Zarok%27s_Beast_Transformation?oldid=35046"
Community content is available under CC-BY-SA unless otherwise noted.