Zarok (died 1386) was an evil sorcerer who tried to conquer the land of Gallowmere. His attempts were thwarted by his nemesis, the knight Sir Daniel Fortesque.

Zarok was a smart but scrawny boy who came from a poor family in Gallowmere. His childhood days were spent with Mr Snuffy, his canine companion. However, on the day of King Peregrin's Coronation, Mr Snuffy was killed by a Royal Guardsman who thought the pup was going to attack the newly crowned king. This event changed Zarok's life forever and marked the beginning of his obsession with necromancy. Zarok left Gallowmere to take up an apprenticeship with an infamous dark sorcerer.[1]

50 years later, Zarok returned to Gallowmere, causing the land's crops to fail in order to expose the incompetency of Peregrin's Court Magician Mazok the Muddled. Mazok's attempts to save the kingdom from the famine failed, forcing the king to seek help from Zarok. Zarok was all too happy to oblige. Once the famine was dealt with, Zarok became the new Court Magician.[1]

As part of his secret plot to take over the kingdom, Zarok would go on to kill the king's champion by spooking the champion's horse with a toad, causing him to be thrown in a well where he drowned. Zarok then convinced the King to appoint none other than Sir Daniel Fortesque to be his new champion, as Zarok knew that Fortesque was incompetent and would doom the king's army during his planned invasion.[1] At some point, Zarok summoned Shadow Demons from another dimension to help him build a vast castle on top of a faraway mountain.

A day before his planned assault on the land, Zarok informed the King and his Champion about the approaching horde of undead, making excuses about why he cannot stop them.

As part of his plan to weaken the King's army, Zarok made the Jabberwocky attack the castle. He was surprised when the Jabberwocky was defeated by Sir Daniel Fortesque. Later, Zarok discovered that it was indeed Sir Dan who repelled the Jabberwocky attack, but an undead version of him from the future. He ordered his henchmen, Boris and Merek, to take this Dan to The Mystic Maidens to kill him.

Under the cover of night, Zarok's dark army spilled forth from their corrupt haven. The army marched south across the Silver Mountains and through the Silver Woods. Zarok's army had eventually overtaken the flood lands. This lead to the Battle of Gallowmere, in which Sir Daniel was killed. However, the history books said that he had defeated Zarok, just seconds before he died himself. Zarok survived the battle, however. He remained in hiding, preparing for a second invasion.

Some time after Dan's death, Zarok discovered a book of Black Magic which would become associated with him.[2] He also gained possession of the Shadow Artefact, the key to the tomb where his Shadow Demons were imprisoned. However, the Artefact was stolen from him by The Town Mayor before he could free them.[3]

100 years after the war, Zarok returned to Gallowmere once again. Using the powers of a spell book spell, Zarok stole the souls of the townspeople and resurrected the dead. While passing through Gallowmere's many locales, Zarok left behind him a green, slimy trail of magic. He was looking for the Shadow Artefact that was stolen from him.

Daniel first encountered Zarok at Cemetery Hill. Zarok tried to trap Dan in the necropolis by bringing two Boulder Gargoyles to life. Later in his quest, Daniel released Zarok's Shadow Demons due to needing an item located within the tomb to make further progress. The demons were killed however when Daniel released lava upon them in The Haunted Ruins.

Zarok awaited in his lair. He sent Fazguls and later his champion Lord Kardok to kill Dan, but Daniel managed to outsmart them. In the end, Zarok decided to confront Dan himself and transformed into a beast. Once defeated, Zarok accepted his death and cast a spell that caused his lair to collapse, which he hoped would bring Dan down with him. Zarok was crushed in the wreckage, his magic was undone.

Five hundred years later, a couple of pages from Zarok's spell book resurface and are used by an evil sorcerer called Lord Palethorn to conquer London. Zarok himself is reduced to an exhibit in a museum in Kensington where he is described only as a coward.

Zarok has pale grey/greenish skin and yellow eyes, and a somewhat feminine attire which consists of purple/red robes with gold highlights and a helmet with pointed "horns". He is rather thin, and he has two horns on each cheek. In MediEvil: Resurrection, his outfit has green gems, possibly to match his trident. His eyes are pale yellow/green and sometimes glow when he casts magic.

In the PS4 Remake, Zarok greatly resembles his concept art from the original MediEvil. His outfit is more purple, the gems on it are now red and he has a horn on his chin, as well as thick eyebrows with three points.

Zarok is a creepy, bitter and twisted soul. He is petty and vain yet intelligent, terrifying and evil yet charismatic, tough and dangerous yet at times campier than a Caravan park. He berates Daniel and calls him mocking nicknames. He also seems to be held in a very high regard amongst his minions. In MediEvil: Resurrection, there is a running gag of him not being able to give an evil laugh.

Using the power of his staff and spellbook, Zarok can resurrect the dead, animate the inanimate and steal the souls of living beings. He was also able to build his own boiler guards and city; The Time Device - using science.

Zarok was designed by Lead Artist Jason Wilson. Wilson imagined Zarok as both "thin and fey" and "an evil puppet."[4][5] Wilson also noted that the character ended up being "rather camp" which gave him "an endearing quality as a villain" and suited the "quirky fun nature" of the game.[6]

An early iteration of MediEvil 2's plot involved Zarok being trapped in the Tower of London. Dan would have had to free him in order to form an uneasy alliance with him to recover his spell book from the clutches of an evil cult.[7] However, Zarok ended up not playing a major role in the final release.

Zarok would have been the main antagonist in the 2003 MediEvil 3 Fate's Arrow concept pitch, teaming up with Kiyante, an evil sorceress with similar ambitions.

In English, Zarok was voiced by the late Paul Darrow, famed for his role of Kerr Avon in Blake's 7. According to Jason Wilson, Darrow was very enthusiastic about playing Zarok and was one of the reasons why Wilson wrote fictional biographies for the game's characters.[8] Darrow also liked to improvise his lines during recording.[9]

In Japanese, he was voiced by Norio Wakamoto who is famous for his roles of Oskar von Reuenthal in Legend of the Galactic Heroes, Barbatos Goetia in Tales of Destiny 2, Charles zi Britannia in Code Geass, Xemnas in the Kingdom Hearts series, Cell in Dragon Ball Z, and Count Dracula in various Castlevania titles, and DIO from JoJo's Bizarre Adventure drama CD's and many others.

An image of Zarok appears in Creatures, an artificial life program created by Millennium Interactive. This is because the backgrounds for Creatures were rendered by Jason Riley who also rendered all the full motion videos for MediEvil.

Zarok appears as a minion, a type of support character, in PlayStation All-Stars Battle Royale. He was made available for purchase on February 27, 2013 as part of the Super Minion Pack 2, Minion Pack 5 and as standalone DLC. Zarok is also mentioned several times in Sir Dan's arcade mode. 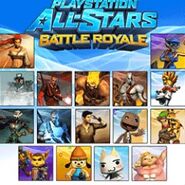 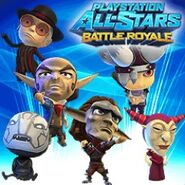 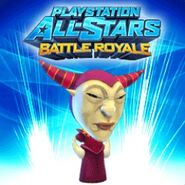 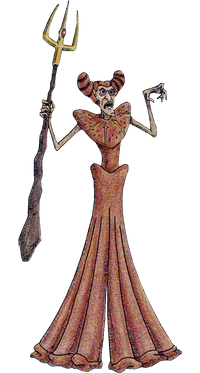 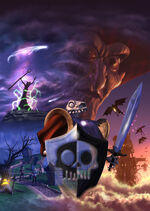 Render of Zarok, Daniel and the Shadow Demons. 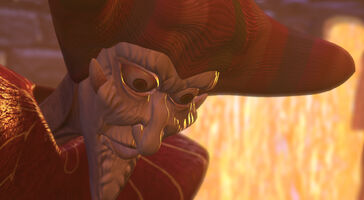 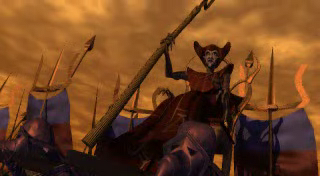 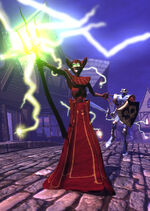 Zarok and Daniel in the Sleeping Village. 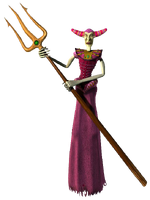 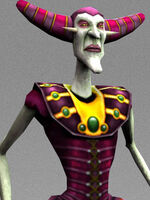 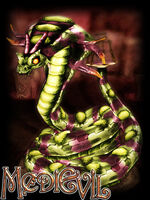