Welcome to the Sleeping Village, Inside the Asylum

The Town Mayor was the elected head of Gallows Town in the late 14th century. He was imprisoned Inside the Asylum when the exiled sorcerer Zarok returned to conquer Gallowmere in 1386.

The Town Mayor was a lusty adventurer in his heyday. He stole the Shadow Artefact from the evil sorcerer Zarok some time after Zarok's banishment from Gallowmere. After Zarok returned, he tore through the town in search of the Artefact, turning many of its inhabitants into goats in the process.[1]

Sir Daniel first learnt of the Mayor from a note in the Sleeping Village, saying he had destroyed the crucifix which is the key to a key. After placing the newly made crucifix in its place in the church, Daniel found another note from the Mayor in a newly revealed part of the building, where it was revealed that he possesses the Shadow Artefact. Daniel met the Mayor in Gallowmere's asylum where he was being held in a cell. After unlocking it with a rune, the Mayor explained that Zarok was the one who put him there and that he left a Dragon gem behind, which he suggested Daniel should take.

According to an alternative historical account, the Town Mayor gave Sir Daniel the Forest Key to unlock the gate of the Enchanted Forest instead.

The Town Mayor was voiced by Christopher Kent[2] in MediEvil and Paul Darrow in MediEvil: Resurrection respectively. 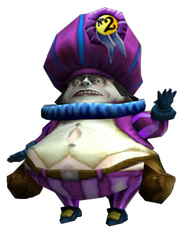 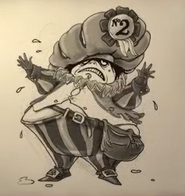 Retrieved from "https://gallowmere.fandom.com/wiki/The_Town_Mayor?oldid=34873"
Community content is available under CC-BY-SA unless otherwise noted.