Wartilda,[1] more commonly known as the Pumpkin Witch, is a friendly witch of Gallowmere. She considers herself a stepmother to pumpkins and is keen on Dragon Gems.

In 1286, a witch called Wartilda is recruited by her friend Noreen to help Sir Dan brew a Body Swap Potion. It is unknown whether this is the same Wartilda as the Pumpkin Witch.

100 years later, Dan can summon Wartilda using the Witch Talisman when standing near her cauldron. She asks Dan to teach the Pumpkin King a lesson and promises to reward him well for it. After defeating the creature, she gives Dan a Dragon gem.

In Return to the Graveyard, Death reveals that Wartilda is one of the four holders of a piece of the Anubis Stone. She gives her piece to Daniel as a reward for defeating the Pumpkin King. Wartilda is also revealed to be the sister of the Forest Witch and to have known Dan while he was alive.

Wartilda has two distinct sides to her personality: Cloying, motherly and sickeningly twee, mixed with a cunning and nasty witchiness!

According to some historical sources, she was very short tempered and hostile to Dan at first but calmed down when she realized who he is, claiming she did not recognize him. Upon Dan telling her he killed the Pumpkin King, she thanked him and gave him the Anubis Stone piece she held before telling him to tell her sister to leave her alone. 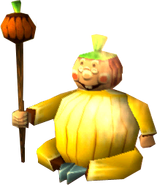 The Pumpkin Witch in the original MediEvil.

The Pumpkin Witch in MediEvil: Resurrection. 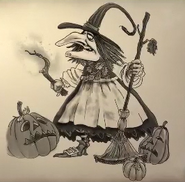 Retrieved from "https://gallowmere.fandom.com/wiki/The_Pumpkin_Witch?oldid=34870"
Community content is available under CC-BY-SA unless otherwise noted.