As you start on the path, you soon find the first book.

As you walk out farther, you soon see a pod sack. You should see a thick vine with a swelled up part. The swelled part is a lighter color and it pulsates. Attack that fat part until it is dead. That is one pod sack down and eight to go. Walk forward and behind the house to pick up a moneybag.

With the first dead pod sack near you, look around for the second book. It lets you know that here is a place where you can use your Witch Talisman.

Attack and subdue the roots above you and walk to the Cauldron. Use the Witch Talisman from your inventory to summon the Pumpkin Witch.

Near the second book, you will see roots growing out of a round, wooden object. Remember this location. Kill the pod sack that is next to it. Walk to the right to find a moneybag. Then, walk through the arch.

As you enter the next area, another pod sack is right in front of you. Then proceed to the left to find a pod sack that is protected by roots. Attack and subdue the roots so you can reach the pod sack and the moneybag. Be careful of the pumpkin bombs.

Turn around as you walk out of that part and you should see the Pumpkin King. He is a huge, rotten pumpkin. You can find two pod sacks near him. Be careful of his tendrils. Both chests with the skull and crossbones near him have bombs in them.

With the Pumpkin King in front of you and the arch behind you, go to the right. Watch out for the pumpkin bombs. Drop down to where the flopping fish are found and kill another pod sack. Jump up onto the middle section to stand in the Health Fountain. There is also a Silver Shield in a chest off to the side.

Run back to the arch and face the Pumpkin King, then run towards and past him. Attack and subdue the Root Tentacles above you. Here you find the last two pod sacks. You also find the exit to the level, but it is currently blocked with roots.

As you kill the last pod sack, the Pumpkin King will awaken. Prepare a distance weapon. I like to use the Crossbow. As soon as you are in range of him, just stand there and fire. He tries to throw pumpkin bombs your way, but just ignore them. He dies quickly.

Now, there is a constant supply of pumpkin enemies to kill. Be sure to fill up your Chalice.

Go back through the arch and return to the Cauldron. If you summoned the Witch earlier, she will automatically appear. Otherwise, use the Witch Talisman. You will be given the Dragon Gem for killing the Pumpkin King.

As you leave from the Cauldron, notice the round, wooden structure near there no longer has roots in it. As long as your Chalice is full, feel free to drop down into it.

You will be in shallow water. You find an Energy Vial, a Chest of Gold, and an Energy Vial. You also find a Merchant Gargoyle. You find rats as well. You can smash them with your Club or Hammer for two coins each. Walk up the tunnel to find the Chalice. The tunnel will drop you out near the Pumpkin King. Run past him to the exit and leave.

Run all the way to the end of the hall and up the stairs. You will see the stairs to the left and right are now solid. The upper floor goes in a circle, so it does not matter which way you choose to go.

You will notice you have two choices. You can listen to what both have to say since you do not have to accept the item. Once you have listened to both of them, then choose.

Near the stairs on the left, you find the warrior queen, Imanzi Shongama. From her you can get the Spear. It comes with 30 throwing Spears. You can buy more from the Merchant Gargoyles. It cannot be powered up.

At the far end of the hall, upstairs, you find the centaur, Ravenhooves. From him you can get a Longbow with 100 Standard Arrows. You can buy more Standard Arrows from the Merchant Gargoyles. It cannot be powered up.

Winner of the Jolliest Witch in Gallowmere Award for the fourth consecutive year!

Wartilda actually runs a successful potions business and makes cool cheddar from her pumpkin-spiced profiteering. The other witches are secretly jealous.

Fresh off the vine, these baby-boomers are in too much of a hurry to grow up. They can't wait to spread their pumpkin seed.

These once good-natured pumpkins fell victim to the Pumpkin King's toxic influence. They're still tasty, if you can convince them not to murder you.

But perhaps you should think about things from their perspective... how would you feel if someone wanted to scoop out your brains and carve a big goofy smile across your face?

A terrifying reminder of the perils of competitive vegetable growing, this sinister squash has become a terrible influence on his once peaceful pump-kin.

Zarok's magic has created the ultimate superfood. This is one ghoulish gourd that's simply bustin' for a dustin'.

Before defeating the Pumpkin King

96 Pumpkin Witch:
Greetings kind sir. I am the Pumpkin Witch. I'm like a mother to those pumpkins - I give them all the love and care a young fruit could ever ask for.
From the moment they first push a shoot above the soil, right up until their heads are cut off and eaten - and look, see how they repay me! Running around and causing mischief!
That nasty old big Pumpkin is a bad influence on the young seedlings, if you teach him a lesson in manners I might give you a nice present!

After defeating the Pumpkin King

98 Pumpkin Witch:
A most edifying spectacle sir: man and vegetable in a magnificent duel to the death. Ooh, I've come over all of a doodah.
Here, have this lovely Dragon gem as your reward. Ohh, lovely majestic creatures Dragons are.

The King Pumpkin sleeps - if you want an audience with this regal plant you should mash all of his pod sacks!

It is rumored that the Pumpkin Witch is in possession of a much sought after Dragon Gem. If you have a Witch Talisman you could summon this kindly Witch. 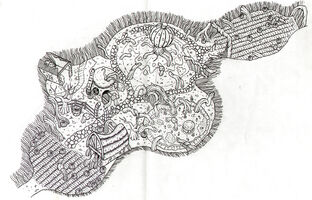 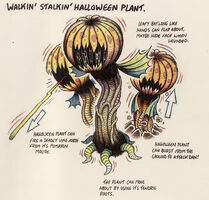 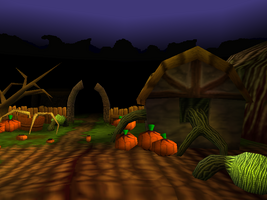 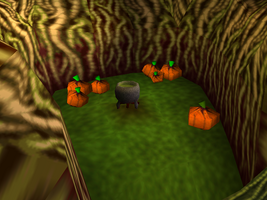 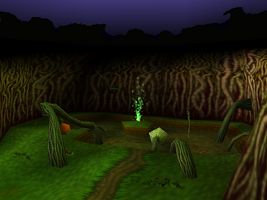 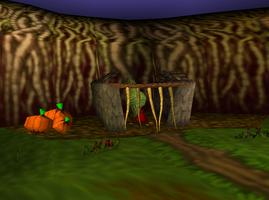 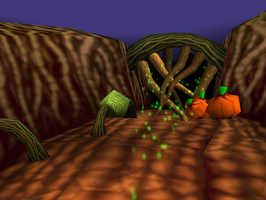 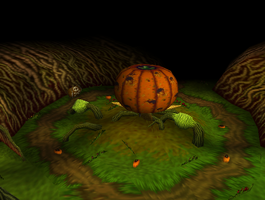 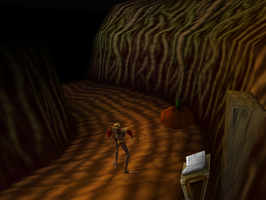 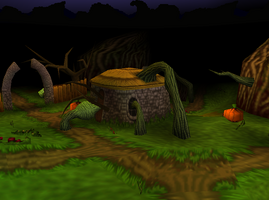 Retrieved from "https://gallowmere.fandom.com/wiki/The_Pumpkin_Serpent?oldid=34795"
Community content is available under CC-BY-SA unless otherwise noted.