The Hilltop Mausoleum is the domain of the Stained Glass Demon and the fourth level in MediEvil and its remake. It is also the first level that features a boss fight.

The first thing you find is the first book.

You should see coffin lids on either side of the hall. Ignore them for now. Run all the way to the end of the hall. In this way, many are opened for you. In the chest, you find a Club. So, the Club you have will be at 100% again. Odds are, if you find a Club, you can use it for something within that level.

Go down to the second hole in the floor, from as you walk down, on the left and drop in to get a moneybag. Walk down to the third hole, but use the Club to break open the coffin lid to your right. Drop in the hole to get an Energy Vial. Then, go up to the first hole, as I was counting, on the right and break its coffin lid open with the Club. (Another way to put that would be, break open the coffin lid in the upper right.) Drop in that hole to drop to the next level. Read the second book you find before the glass.

Only the Imps which do not carry a torch will steal. Of course, they steal your weapon. Kill the Imp and you can get your weapon back. Make sure you kill such an Imp before it has a chance to exit the room with its ill gotten gains.

The blue wall is only glass, so smash it to continue. Walk to the left and break the red glass. Notice the spikes in the floor. Run down the hall and jump over the spikes as you run. There are three sets of spikes in this hall. If you land in the spikes, quickly jump out of them. Pick up the Energy Vial on the right. Then, get the Earth Rune. Be warned that as soon as you get the Earth Rune, the floor will start to fall away. Run back up the path you just came down to keep ahead of the falling floor. If you fall down, you lose what is in your life meter.

(As a side note, in any case with crystal spikes in the halls, you can also break them with your Club as opposed to trying to jump over them. It is possible to break all such spikes without losing your Club, but before you go merrily smashing, remember to keep an eye on your Club percentage. When it reaches 0, you will no longer have a Club.)

Break the purple glass. Run down the hall and jump over the two sets of spikes. Walk into the green hand to use the Earth Rune, and then drop down. Be careful as a thief Imp is there. Jump to the right to get the moneybag. Go up the hall and read the third book.

Go up the stairs. Be careful as another thief Imp is up there. You also find a Fountain of Rejuvenation there. Go to the right.

Here you can pick up the Moon Rune. Go to the right and through the doorway. You will find the Chaos Rune, an Energy Vial, and another Energy Vial. You also find a Merchant Gargoyle. Stock up here. Throwing weapons will be important later. Read the fourth book.

Leave to the left, then go down and out through the gate. Return to the hole in the floor that leads down. Light is shining up out of it. Drop into it.

Walk forward and past the book. Go to the right and break the red glass. The first set of spikes is longer and you will probably land in it, so be ready to quickly jump out of it. The next two sets of spikes you can jump over easily. Then walk into the blue hand to use the Moon Rune. The last set of spikes is another long set. Get the Chest of Gold and the Energy Vial. Once you take the Sheet Music, the floor will start to fall and this time it will fall faster so be ready to run back the way you came. If you fall in the void, you will lose what is in your life meter.

If you have lost your sense of direction, look for the path where you can see the book. You need to go the opposite way. Run down that path and drop out the end. Go up towards the third book and go up the stairs. Go to the right and keep going to return to the organ room. Stand close to the skeleton and face him. Then, bring up the inventory and select the Sheet Music. In the wall you will find a Chest of Gold, another Chest of Gold, yet another Chest of Gold, and the Chalice. Then go left, left again, and go back down the stairs.

Run to the bottom of the room and walk into the red hand to use the Chaos Rune. You will see a fire on a path. You can push that fire along its set path by walking into its base. In the chest you will find Throwing Daggers. In a niche in the wall to the left, you will find a Copper Shield. You have to jump into the niche to get it. Push the fire all the way under the heart.

Walk the path back out and go back up the stairs to the Fountain of Rejuvenation. You should equip either the Throwing Daggers or the Crossbow ahead of time. Go to the right. You can avoid the boss by not walking up to the lights. (In other words, you can still get the Chalice if you have not done so already.)

Once you are ready, walk up to the lights and be ready to fight the Stained Glass Demon.

When it is on the floor, you should be running. It may try to land on you, and if you are already moving, you will have a better change of getting out of the way. If it throws out spikes, use the

to use your Copper Shield to block them. Remember, you need the Copper Shield out front and in the way of the spikes for this to work.

The Demon will float in the center of the room and its heart will stick out of its body. At that point only, face the heart, so the green targeting light can lock onto it, and use your chosen distance weapon by holding down

. In other words, if you are facing the Demon's back or a wall, you are not going to be able to hit the heart.

If a stream of spikes comes out of the heart, use the

to bring up your Copper Shield and run from the spikes. The stream will follow you. If a beam of energy goes to you and you are encased in crystal, quickly use your weapon as fast as you can to break free. (Press

rapidly.) If it sends out a blast of energy, have your Copper Shield out and ready, before it does, to protect you. It repeats these three attacks in that order. If you lose your Copper Shield, a new Copper Shield will drop down into the center of the room. This will happen as many times as you need it to happen.

Once the Demon is dead, pick up the Skull Key.

This time, talk to Stanyer Iron Hewer who is in the upper right. He will give you the Hammer. You can power up the hammer with the

button. The Hammer can smash through things, like a Club.

The Imps of the Hilltop Mausoleum grew tired of the phantom's incessant practice and hid his sheet music away.

Like most impish plans, this one backfired. The phantom continues to bang the keys, but sorely lacks improvisational skills.

Back in Peregrin's day, Imps were often kept as household servants. Sadly, those were cruel times, and many Imps were treated very poorly by their masters.

On the morning of the Battle of Gallowmere, every last one of King Peregrin's men awoke to find his House Imp gone, and along with them, every last undergarment in the kingdom. Never before had an army's charge been so devastatingly broken before battle had even begun!

I always thought it was a bad idea when they put a demon on their stained glass window. "Isn't that a little odd for a holy place?" I said. "What if a passing sorcerer brings it to life using arcane magic?" I said. But did they listen?

Yes, he might have a glass jaw, but if you think shattering his dark heart is going to be easy, you'd better think again!

You are entering a house of pain! Rumors abound of evil doings in the secret catacombs below this very Hall.

Watch out for sticky-fingered imps. These thieves will strip you down to your armored undies.

The Stained Glass Demon is the Master of the Mausoleum. His wretched soul lies preserved inside a frozen glass heart. Shrouded in a veil of darkness beneath the Mausoleum you will find this pre-frozen menace.

The would be Phantom of the Opera longs to play a new tune, but he seems doomed to repeat the same chords of despair over and over.

The level was originally going to be called The Desecrated Church.[1] It was renamed due to the original name being deemed too blasphemous for the US market by Sony's American legal team.[2][3][4] 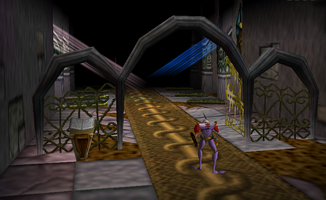 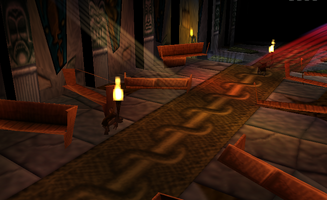 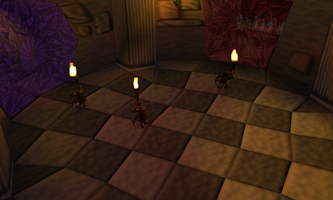 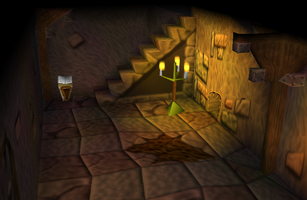 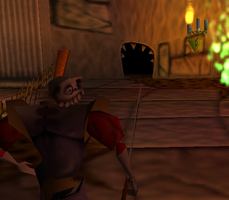 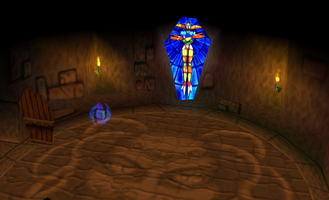 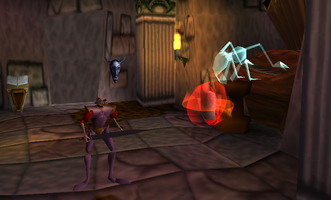 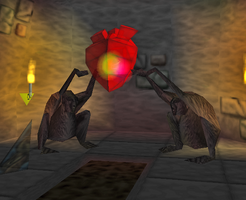