The Demon is the final boss in MediEvil 2, alongside Lord Palethorn.

Using the spell book, Palethorn has summoned a large blue devil - and I'm not talking about Duke University's mascot! This demon is the biggest and baddest enemy in the game. His massive fists strike earth-shattering blows on the narrow precipice where Dan makes his last stand. When he isn't trying to pound your bones into dust, he'll be spitting fire. None of your weapons are capable of hurting him, so you'll have to discover an indirect means to get rid of him.

This is one of the hardest boss fights in the game. The Demon has two attacks. It will try smashing Daniel with its fists and it also spits fire. In order to avoid its fists, stand in the center of the area. When he's about to strike, quickly use the Daring Dash to get away. The Demon hits three times, from right to left or from left to right. After this attack, the camera will shift to show Palethorn's aircraft. Equip the Gatling Gun (or any other ranged weapon) and fire at him when he's in range. Avoid the bullets and missiles he shoots at you. The missiles will stun Daniel and prevent him from attacking and moving. After Palethorn flies off, the Demon will strike again. If The Demon bends its head back it's going to spit fire. You have to stay away from the center in this case. The fire will start in the middle and will spread out in both directions. When it approaches, jump over it. It'll be Palethorn's turn afterwards; shoot at him again. Once you deal enough damage to Palethorn's craft, he will shoot his own Demon by mistake The Demon will hit the ship in its confusion, dealing damage to Palethorn. After this, the demon's back to smashing with his fist, but this time, he'll do this twice before Palethorn attacks. Once Palethorn has accidentally shot the Demon a few times, the Demon's fire attack changes slightly. You will have to jump over two walls of fire now. The battle's over once Palethorn shoots the demon four times. 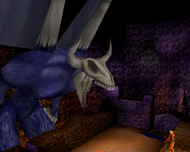 The Demon before the fight. 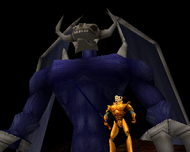 Daniel and the Demon. 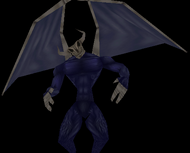 Retrieved from "https://gallowmere.fandom.com/wiki/The_Demon?oldid=35049"
Community content is available under CC-BY-SA unless otherwise noted.