The Crystal Caves (水晶の洞窟, Suishō no dōkutsu?) is the sixteenth level of MediEvil. This level was replaced by Dragon Island in MediEvil: Resurrection.

Be careful of falling down into the green slime as that will drain what is in your life meter.

As you enter, follow the path. Be aware that some of the Shadow Demons are flying around in this room. Once you come to a choice of directions, notice the Chalice is to the left, but go to the right. At a cave entrance, you will find a GARGOYLE. Speak with it.

Remember you can kill bats, but they do not increase your Chalice percentage.

The next room has another Imp trapped in a crystal as well as a thief Imp which is wandering around the room. (Remember that if an Imp is not holding a torch, it can steal from you. Kill the Imp to retrieve your item if it is stolen.) Go to the left. You will notice a spinning crystal. Beware of its beams. Walk in the same direction it moves, dodging from side to side as necessary, and pick up the BAG OF COINS and the EARTH RUNE. Then, leave this room.

With the room where you found the Earth Rune to your left, go forward. You will find more Imps in crystal, as well as Rhinotaurs. Take note that the Rhinotaurs will free themselves from the crystals if you get close to them. You also will find a chest with a skull and crossbones. Feel free to open it for the time bomb which will kill a couple enemies for you.

Walk up onto the path of gray rock. In a crystal with a Rhinotaur, you find a SILVER SHIELD. Near there, you find a BAG OF COINS. Drop back down onto the tan colored floor. Then, go to the right and go up.

Walk into the green hand to use the Earth Rune which will open up the gate. In this next room, smash open a crystal to the left to pick up a CHEST OF COINS. You should see a waterfall. Walk into and past it.

This next room has four levels of ground. Mentally, number them from one to four from left to right. You start out on level 1. Read the SECOND BOOK there.

Equip your Hammer and use it on the ground. Notice the ceiling falls on level 2. This is how you fight the Dragon. You cannot hurt the Dragon with your weapons. You must cause the ceiling to fall on his head.

The Dragon sticks just his head out of the holes on the different levels. He starts on level 2. He moves to level 3, then to level 4, then to level 1, then back to level 2, etc. Use the time in-between his attacks to try to move to an appropriate level so that you can bring the ceiling down onto his head. Be careful of his fire as it sets you on fire and you burn for awhile before the flames go out.

Once you defeat the Dragon, you will see he leaves an object behind. Walk into it to take the DRAGON ARMOR. As he said, it will protect you from fire. This means you can walk through fire. It also means if you are set on fire, if you equip the Dragon Armor, it will put out the fire. It allows you to attack with fire. It cannot be powered up with the Square button. When you equip the Dragon Armor, it will unequip your shield. However, you can still equip your shield.

Return to level 1 and exit. From as you walk through the waterfall, go to the right. This leads you into a room which has monsters trapped in crystals. It also has some bats. As you walk farther into this room, you find a pool of water. Do not fall into it as it will drain what is in your life meter. Walk around it to the left, but do not settle on one spot. You will notice some of the floor sinks as you are on it. Stay on such places long enough and you will be sinking all the way into the pool. Pick up a BAG OF COINS. (To be extra safe, you may want to make walking jumps over those pieces of the floor. They are visibly different from the rest of the floor.) At the exit to the room, make a walking jump to the right to get another BAG OF COINS. Then jump back and enter the next room.

There are more monsters in crystals here and all but the last one free themselves. You find a CHEST OF COINS in a crystal with a Rhinotaur. Walk through this room of crystals and drop down the slide at the end.

You should see the spinning crystal in front of you. Go left and into the next room. Then, go to the right. Walk into the yellow hand to use the Star Rune. The floor should rise so you can cross. (Dropping down onto the floor before it is raised is like dropping into a void.) Kill the enemies here and you should be able to collect the Chalice. Be careful of the thief Imp.

Return to where you used the Star Rune. Cross over again and leave this level.

An ill-fated mining expedition by citizens of Mellowmede caused a tragic and brutal retaliation by the Rhinotaurs.

They have since gone into hibernation. Nothing irks them more than being woken up early. And to them, anything before 2 PM is early.

Back in Peregrin's day, Imps were often kept as household servants. Sadly, those were cruel times, and many Imps were treated very poorly by their masters.

On the morning of the Battle of Gallowmere, every last one of King Peregrin's men awoke to find his House Imp gone, and along with them, every last undergarment in the kingdom. Never before had an army's charge been so devastatingly broken before battle had even begun!

Some of the most evil, murderous critters ever to blight the land! Thankfully, they were locked away in a hermetically sealed vault by a great hero hundreds of years ago. Don't worry! We're safe! Only a complete fool would ever set them free.

They're vampire bats. Actually, they're just bats. But they bite. That's sort of vampirey.

Perhaps the last remaining dragon? A fearsome, indomitable beast with absolutely no vulnerabilities, apart from that one cranial fracture he sustained from waking up with a start and banging his head on the cave roof. Good thing no one will ever find out about that!

Dragons were once hunted for their blood, which is said to grant the power of fire-breathing. This particular dragon's solitude stems not from fear of hunters, but from his crippling social anxiety.

Tread softly in these caves for an ill tempered Dragon has a lair here.

The mean old Dragon can be summoned by inserting two Dragon Gems into the eye sockets of the relief.
The grouchy Dragon doesn't come out much as he is afraid of the roof collapsing over his head! 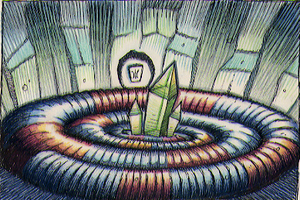 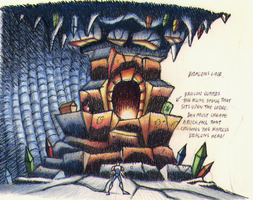 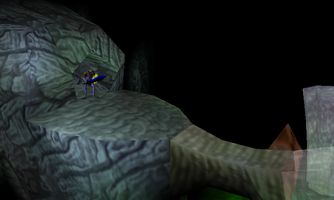 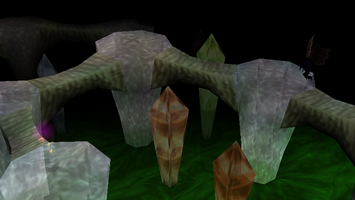 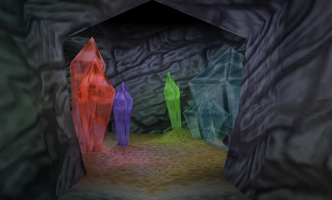 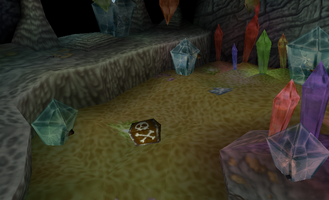 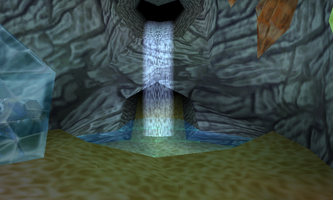 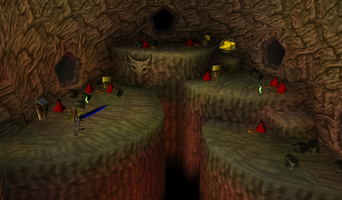 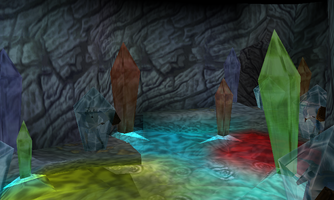 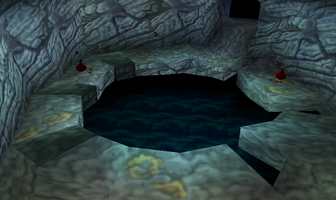