The Asylum Grounds (迷宮のジャック, Meikyū no jakku?) is a level in MediEvil. It is not available in MediEvil: Resurrection. Daniel encounters the master of the maze, Jack of the Green, who promises to reward him if he solves his riddles.

You start at the gate. Follow the path down to the first book.

You will walk past a unicorn bush. At a four-way crossroads, kill the head of the dragon bush. With where the head was in front of you, go to the right. Walk up to the statue of a face and press

to talk with Jack of the Green. He will tell you the first riddle.

Return to the crossroads. Go back to the unicorn bush. Behind that bush is a green star. Hit the star.

Walk back to the crossroads and keep going through, in a straight line, to the opposite side. You will find a bush shaped like a person, a closed gate, and a green star to the right of the gate. Hit the star.

Return to the crossroads. Go the opposite way from Jack of the Green. This brings you into the hedge maze. At the image of two masks, walk to the right first. It will not be long before you find a green star between two trees. Hit the star.

Return to the image of two masks, and with them before you, go to the left. This will lead you to a large, open area with holes in the ground. Enter this area. Hit the bell to ring it and bring out more zombies if they have not all come out on their own. To the left of the bell is a green star. Hit the star. Near the bell, while facing the bell, drop into the hole on the right to get a moneybag. Turn so the bells is behind you. Walk back towards the entrance and drop into the hole on the right to get another moneybag. When you try to leave this area, you will see the hedge has grown shut. Just cut through it.

With the area with the bell behind you, go left. This will lead you to a bush which fires at you. To the left of it is a moneybag. To the right of it is a green STAR. Hit the star. Return to Jack of the Green. Speak to him to hear the next riddle.

Return to the hedge maze. At the image of two masks, go to the left. Proceed past the area with the bell. You should notice a way to the left has opened up now. Go that way. You immediately find a Silver Shield in a chest. Once you find a clown bush, you also find the second book.

There are five stone slabs around the clown bush. There is a sad face on one side and a happy face on the other side on each slab. It takes two hits to move the face from a sad face to a happy face, but none of them want to stay happy. After you turn the happy face towards the clown bush, it is only a matter of time before the slab will turn that happy face away. However, they do not all turn away at the same rate.

Once you make the clown bush happy, return to Jack of the Green. Talk to him to hear the next riddle.

First, go back towards the bush that looks like a person, which is opposite the area with the unicorn bush. You should see the gate is open now. You should also see cats are roaming around here. Go that way and kill all the zombies. At the end of the path, you find the Chalice and an elephant bush. You also find a Merchant Gargoyle next to the gate. As you go back down the path from the elephant bush, drop into the second hole along the way to get a moneybag.

Go back to the hedge maze. At the image of two masks, go to the left. Go past the area with the bell. You should see a new way has opened to the right. Go that way. You will find an octopus bush that will attack you. You may want to use a distance weapon to kill it. Go through the arch it protects to find the Chaos Rune.

Return to the crossroads. Walk back towards the entrance and you will find the red hand. Walk into it to use the Chaos Rune. It opens a gate. Walk onto the moneybag. Entering this area also causes a mouse to follow you, as the sign on the wall shows. Walk slowly so the mouse can keep up with you. Proceed back to the elephant bush with the mouse. If you get too close to a cat, the mouse will run away and will soon vanish in a puff of smoke. If that happens, return to the gate and get another mouse. The cats do not move quickly, so watch which way they are going and adjust your path accordingly. The elephant bush will react when you are close enough to it with the mouse.

Return to Jack of the Green to hear the last riddle. Then, return to the elephant bush.

The elephant bush will have opened up a new direction. Follow it. Where the bell is located, drop into the second hole to get a moneybag. The chest with the skull and crossbones holds a time bomb. Follow the path farther and to the left you will find a Health Fountain. Ignore the way to the right for now. A gate in the ground has been lifted at the end of the path. Drop down into the hole.

Walk down to exit the room. You will notice three sources of light in the larger room. You can move them by walking into them. On the tree solid walls of the center structure, you should see a red symbol, which is a window, in the middle of the wall. Push the fires so that one is pressed up against that symbol on each of the three solid walls. Then, enter the original room. The lights will shine in through all three windows. Stand in the light. You will exit within the hedge maze.

When you are almost to the end of the path, go to the right. The head on the arch will fire at you. Use a ranged weapon to kill it. You will come to a chessboard. Here you find an Energy Vial and another Energy Vial. Read the third book.

There are four chess pieces on the board. They each have their own color. There are four matching colored squares on the chessboard. You must move all four chess pieces onto the squares that match their colors. But, you must move them as chess pieces would really move, though you can only move them each one block at a time. The King (blue) and Queen (red) can move in any direction. The Castle (yellow) can only be moved horizontally or vertically. The Bishop (green) can only be moved diagonally. Get behind them and hit them with your weapon to make them move in the direction you want. Once they are all in place, the center square will turn into the exit. Jump down into the hole.

Run to the end of the hall and go upstairs. You should see this time you have three choices. Feel free to speak with all of them. Just make sure not to accept anything until you are sure of the one you want.

The fellow holding an axe is Bloodmonath Skull Cleaver. He will give you an Axe. It normally works up close, but the

button allows you to throw it sort of like a boomerang. So, you do not need to buy more.

If you speak to Ravenhooves again, you will get the Flaming Longbow. It comes with 100 Flaming Arrows. You can buy more Flaming Arrows from the Merchant Gargoyles. It cannot be powered up.

If you speak to the fellow with the large shield, Karl Sturnguard, you will get the Gold Shield. Even if the Gold Shield reaches 0, you can have it fixed by the Merchant Gargoyles. So, you will never lose this shield.

Jack of the Green

There once was a statue named Jack,
For riddles, he did have a knack,
Dan entered the garden
Which Jack was a-guardin',
A smart hero would have turned back.

Disciples of the head monk, these men of the cloth have been driven mad by the disappearance of their master - and Jack's incessant ramblings.

The harsh chime of a bell tells them an unwelcome guest has arrived. Or that it's time for dinner. Perhaps both!

People seldom consider how hard it is to trim a sentient shrub - not least the fire-breathing types, who would just as soon set themselves ablaze as play understudy in your latest topiary production.

No... gardeners in Gallowmere do not get enough credit!

Jack of the Green

48 Jack of the Green:
Greetings Sir Fortesque, my name is... Jack of the Green. I am the master of riddles and this maze is my domain.
You are free to leave but ONLY once you've answered four riddles - puzzles so fiendishly difficult, so perplexingly complex that no man has ever solved them - ha, ha, ha. Now try my first riddle..
At night they come without being
fetched;
By day they are lost without being
stolen.

53 Jack of the Green:
Well done, Sir Knight. But my Star Riddle was but a trifle - I always like to begin with an easy one.
Return hither - you will not find my next conundrum so simple!

50 Jack of the Green:
I live for laughter
I live for the crowd,
Without it I am nothing.

54 Jack of the Green:
All right, yes it was a clown - very clever I'm sure.
Return in haste, Sir knight, for I wish to see the despair on your face when you hear my next cryptic puzzler.

51 Jack of the Green:
Face like a tree,
Skin like the sea,
A great beast I be,
Yet vermin frighten me!

55 Jack of the Green:
Did you spot my bluff? I pretended that riddle was hard but in truth it was obviously an elephant.
This time, however, I almost pity you: the answer to my next vexing enigma has eluded the finest minds of a whole generation.
Come to me!

52 Jack of the Green:
I tolerate the moon and stars,
I can't abide the sun,
Banish me with torch light
And you'll see me turn and run.

56 Jack of the Green:
Blast you! It took me ages to come up with that Darkness one!
Very well, outrageous as it seems, my vast intellect has been matched by your badly decomposed brain.
Return at once and I shall give you your prize.

57 Jack of the Green:
You think you're so clever don't you?
Here you are Sir Clever Clogs, I grant you free passage through my maze - find your own way out!

This is the garden of Zarok, nothing here is as it first seems. To leave this maze you must first seek out the one called Jack of the Green!

Show the Clown you care by surrounding him with smiles.

Solve this last puzzle and you will open the secret entrance to the asylum - the Town Mayor is imprisoned here, along with an army of madmen. 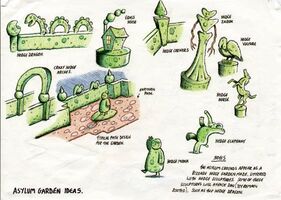 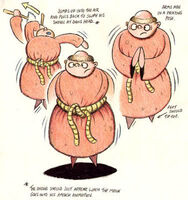 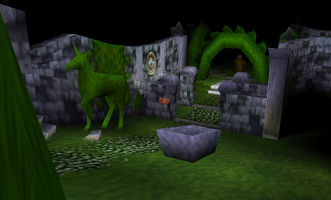 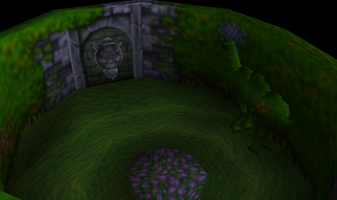 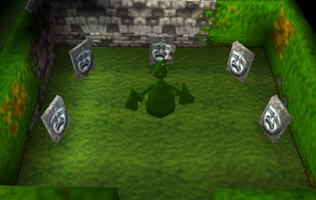 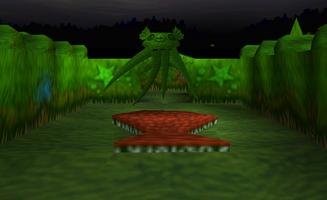 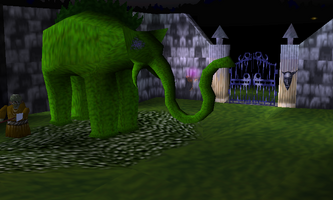 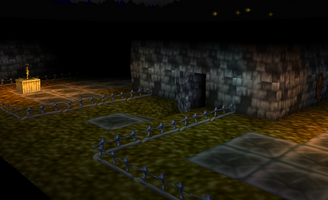 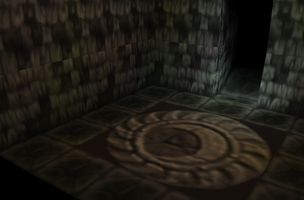 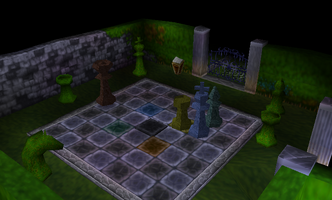