The Ant Caves (蟻の巣, Ari no su?) is a quest found in MediEvil. This level was not remade for MediEvil: Resurrection.

To begin the level, Daniel has to summon the Witch of the Forest near her cauldron in the Enchanted Earth using the Witch Talisman. She will task him with finding seven pieces of Amber in the Ant's nest. If he refuses to help her, the quest will not initiate and will not be available until the game is reset or the Enchanted Earth is completed. If he fails to bring her seven pieces of Amber, she'll refuse to reward him.

Make sure you use your shield to deflect the poison from the frogs.

Run all the way down to a symbol on a rock. Go to the left.

Use your shield for the projectiles of the plants as well. You should see a Cauldron and the first book near it. (I know this book is not part of the Ant Caves, but it is relevant to it since it reminds you that this is a good place to use the Witch Talisman.)

Approach the Cauldron, face it, and use the Witch Talisman from your inventory.

Once inside The Ant Caves, talk to the gargoyle. As you proceed, you will enter a room with a pillar in the middle of it. Go to the left first. Here you find a chest with a Club. There is a portal that blocks your way. You also find the second book.

Return to the room with a pillar in the center, and this time, go to the right. You find the way is blocked. You can also hear someone crying out, "Help," from beyond the barrier. Since you found a Club, you know you need it, so use the Club or your Hammer to break the barrier. Enter the room where you will find a fairy. In this room, you also find a chest of coins.

Leave the room and return to the portal. The fairy will open the portal for you and will give you three fireflies as lights. Proceed into the entrance. This walkthrough takes you through all the passages. It can be helpful to try to map this area. I numbered the rooms to make mapping easier.

As you drop down several times, you will find yourself in a tunnel which leads to a large room which is the first room. Here, you will see ants. These are the smaller, more lightly colored ants. They will not bother you as long as you do not provoke them. If you search around the room, you can see small holes that you cannot enter. These are exits for the ants. Many more such holes exist in these caves. Do not worry about killing the ants. There is no Chalice percentage here.

You will walk down a passage and into the second room which has a couple stalactites. You can attack the larvae. One leaves a bag of coins. You should also see a glowing pentagon. From there is another cry for, "Help." Use the Club or Hammer to break open the pentagon and free the Fairy. This fellow is one of six. After you free him, boulders will drop and larger, darker, and more aggressive ants will appear for you to fight. You can use the Club or Hammer to break the boulders in your way. From this room, to continue, you can go up or left. Go up. This will require breaking some boulders.

This leads you to room three, which is a small room with an image of a shell on the floor. A piece of amber is there for the taking. To proceed from here, you can go right or left. Go to the right. This way is not blocked by boulders.

This brings you into a long passage. You will find an Energy Vial along the way. As you continue, a couple boulders roll past you, so try to walk in the middle of the passage to avoid them.

You will emerge in room four, which is a large room filled with larvae. You soon find an Energy Vial. Kill all the larvae to find a bag of coins, a bag of coins, and a bag of coins. You also find a piece of amber. Once you are done looking around, return to where you entered this room. With that tunnel in front of you, to the right you find another pentagon. Smash it to free the second fairy. With the pentagon in front of you, go to the right. The way is blocked by two boulders. Smash them.

You will be back in room three at the image of a shell. From your current perspective, go right to return to room two.

From as you enter room two, go to the right and take the first passage you find. This, steeply, takes you down. You will enter room five.

As you enter room five, take the Energy Vial. This room is defined by its stalagmites, which rise up from the floor. From as you enter, you can go to the right to enter a passage that steeply goes upward. This will take you back to room four.

Once in room four, go to the left. As you enter the next passage, you will see large stalactites. This passage leads to a small room which is room six.

Room six has red marks on the floor and the wall. From as you enter room six, go to the left.

This will take you to room seven where you will find a Health Fountain. Kill the larvae to get a piece of amber and a bag of coins. This room has a couple mushrooms in it. From as you entered, look to the left for the passage.

From as you enter room six, you can go up or right. You have been to the right, so go up.

This will lead you into room nine. Kill the larvae for a bag of coins and a piece of amber. You can go left or right. Go to the right.

The long passage leads to a small room, room ten, which has an image of a scarab on the floor. Take the Energy Vial. You can go up or left. Go to the left.

In this passage, you will find an Energy Vial. You also find another pentagon. Smash it open with your Club or Hammer for the third fairy. At the end of the passage, you will be back in room nine. From as you enter this room, go up to return to room ten. When you enter room ten, go up to proceed.

In this passage, you will find another pentagon. Smash it open with the Club or Hammer for the fourth fairy.

Use the Club or Hammer to break the barrier. Drop into that passage only if you are sure you are done as you will not be returning.

Proceed until you find the Queen Ant. Approach her and she will begin the battle. Keep on the move as she spits poison. Keep your distance as you sends out ants to attack you and you need room to fight them and to see them coming. I would recommend you keep your Broad Sword, Hammer, or Axe out to fight the ants. If you are being attacked by them, I would suggest you kill them first before attacking the Queen Ant, when she is vulnerable.

Periodically, the Queen Ant will raise herself up and the room will shake. Boulders from the ceiling will fall down around you. This also makes her an easy mark. Move close enough to be in range. Equip your Spear first and throw it at her. When you run out of Spears, use your Flaming Longbow. (In short, start with the first distance weapon you have in your inventory on the far right and then work your way to the left as you run out of projectiles for each one.) Make sure you press and hold the

button for rapid fire as you use any of those.

Once she lowers herself down again, back away and use your Broad Sword, Hammer, or Axe again to fight the ants that she sends your way. Wait for her to raise herself up again before attacking her.

Once you defeat her, you will see the exit. Be careful of the large, larvae-like thing above you. If you jump into it, it will hurt you. Drop down into the exit.

For collecting seven pieces of amber, the Witch gives you a weapon called the Chicken Drumstick. You are given 30 of them. It cannot be powered up. As you use it, you throw it and enemies near it turn into Roast Chicken. Walk onto the Roast Chicken to get 20 points of health. The Roast Chicken will vanish if you do not hurry up and take it. If you want more Chicken Drumsticks, you can enter the Enchanted Earth again, summon her again, and find amber for her again and she will give you more.

For finding all the fairies, you will earn the Chalice which sends you to the Hall of Heroes. If you play this area again, you can still free the fairies but you will not earn anything for doing so.

This magic portal was crafted by the faeries. It appears to have been crafted to prevent something escaping from the tunnels below.

If you are brave enough to go beyond this point you will enter the chamber of the dreaded Queen Ant.

Be aware, once you have encountered her six-legged regalness there will be no going back!

A proud and fair race, the Fairies were rulers of the underground world, until that fateful day when the Ant Queen invaded their turf.

Honestly, we don't know why the ants have them imprisoned, but for some reason, fairy magic doesn't seem to work against ants... seems odd to me, but hey - I don't make the rules.

Fascinating creatures, ants. Did you know they're as old as the dinosaurs? That they "talk" using chemicals? Or that they share a hive mind?

And, contrary to popular belief, they actually have no interest whatsoever in your pants.

Although accustomed to letting her soldiers do all the fighting, this is one tough bug lady.

She's an acid-spitting queen who will fight to her last gasp to defend the brood of insect infants incubating inside her egg sac... if only there was an airlock you could flush her out of. 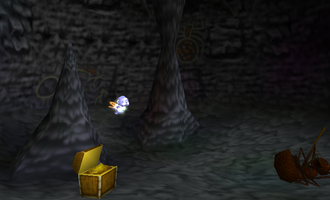 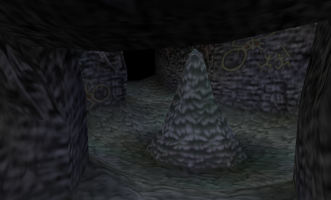 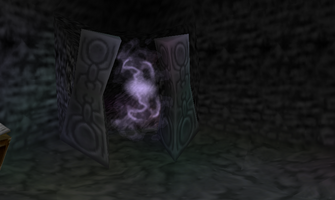 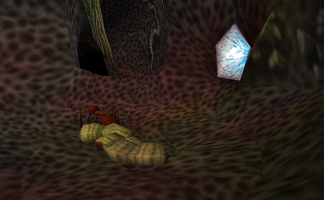 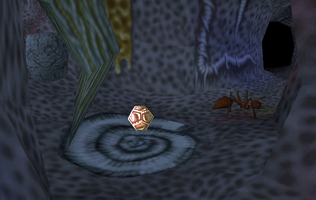 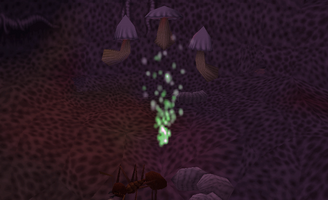 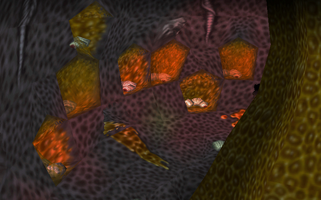 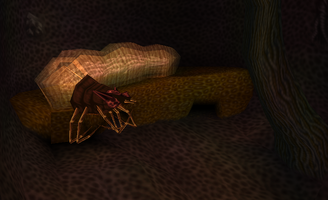