Stanyer Iron Hewer is a hero found in the Hall of Heroes.

In addition to being the strongest man who ever lived Stanyer Iron Hewer was unsurpassed in his skill as a blacksmith. He was equally happy pounding on his anvil at home as he was pounding on someone's head in battle. It was said that his only fear was the end of the village smithy as the focus of manufacture in favour of more centralised units - as if!

Stanyer is the second hero Dan visits in the Hall of Heroes. He provides Dan with his hammer and two Chests of Gold.

His likeness in the PS4 remake was based on Jeff Nachbaur, who served as Executive Producer on the remake. 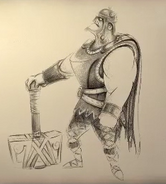