Stainglass Demon
Master of the Mausoleum

The Stained Glass Demon is the Master of the Hilltop Mausoleum. It is the first boss encountered in the game.

The Demon was first mentioned within a book before the Skull Gates in The Graveyard. It was revealed to be the Master of the Mausoleum, as well as the holder of the Skull Key (or the Stained Glass Key according to certain sources). A gargoyle near the gate to Cemetery Hill told Dan that Zarok travelled to the Mausoleum to meet with the demon.

Later, Daniel travelled into the catacombs below the Mausoleum and released the demon's soul by shattering the frozen glass heart in which it was preserved. The soul flew to the stained glass window and when Daniel approached it, the soul entered the window and the Demon awoke, ready to battle him.

After it was defeated, the Demon shattered and dropped its key.

The Demon can only be defeated using ranged weapons. The only ranged weapons available to Dan by the time he reaches the demon will be the Arm, the Throwing Daggers and the Crossbow.

The Demon has two "normal" attacks and three "charged" attacks. The two normal attacks consist of jumping on Dan, or jumping opposite him and throwing glass shards at him. The charge attacks are throwing a large amount of glass shards at Dan, trapping him in a glass crystal that drains his health, and creating an explosive burst of energy that damages the player.

Dan can only attack the demon when it hovers in the air, its heart separates from the body and it starts charging its attack. It is recommended that Dan runs immediately after the demon launches its attack. 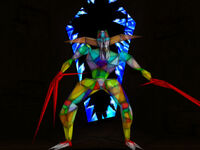 The Stained Glass Demon breaks out of the glass. 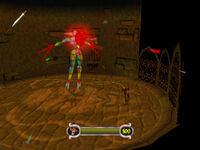 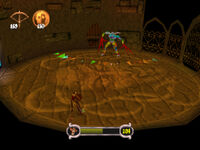 The Demon creating wave of shards at Daniel.

Concept art of the Stained Glass Demon by Mitch Phillips.

Stained Glass Demon before his awakening.

Battle with the Stained Glass Demon. 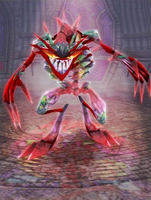 The Demon shattered to shards.
Add a photo to this gallery

Retrieved from "https://gallowmere.fandom.com/wiki/Stained_Glass_Demon?oldid=35152"
Community content is available under CC-BY-SA unless otherwise noted.