Zarok's Lair is the final level of the game. The level is split into three sections, two of which are a boss fight. The other section involves a fight between two armies. You, the player, then heal Dan's army to defeat Zarok's army.

The strategies used for this level are basically the same across all the categories (the differences are noted below). The video below outlines the whole fight. 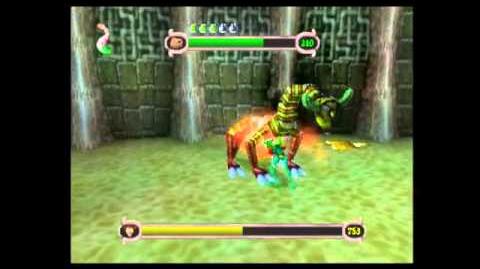 When the level starts, you pick up the good lightning and run to the centre. You then can either trigger the cutscene or use the Zarok's soldiers despawn glitch (Glitched runs only! See below). In either case, Zarok's army (the Fazguls) will spawn and then Dan's army will spawn.

The only substantial difference between the categories for this fight is that in the Any% categories, you will have substantially less life bottles for the fight (usually 4 or 5). This makes the two armies fight a bit more difficult as with less life bottles this limits the amount of healing that can occur. If playing a glitched category, you can also use the despawn glitch to make the fight considerably easier.

The soldiers change colour based on their health and will cry out when their health is low. If Zarok's soldiers win, then it's automatically Game Over.

Once Zarok's army is defeated, the remaining soldiers become energy vials, which need to be picked up to replenish your health.

The Lord Kardok fight is the easiest fight of the three. Change to the dragon armour once the cutscene has finished - or when you are collecting the energy vials from the previous fight.

Once the cutscene ends, look and find Kardok, he will be walking around the edge of the arena. When you move up to him, an energy field will be surrounding him, making him invincible. Once Kardok starts to attack, hold

to start using the flame breath and jump up and down. At this point Kardok's horse will be raised up on its hind legs. Just keep jumping up and down and using the flame attack, ignore all the damage you are taking. This will allow you to continually attack him and it's the fastest strategy to kill him.

So now you must face Zarok. This fight is the most random, because it's not really possible to force Zarok to become vulnerable. When Zarok raises up on his hind legs and swipes with his arms, he is vulnerable. Using the Dragon armour again, just hit him with the fire breath until he becomes invulnerable again. It's sort of possible to bait him into becoming vulnerable by standing still and pressing

to raise your shield. Sometimes, this causes him to swipe his arms and allows you to attack him. When he becomes invulnerable again, you can run away and hope he decides to become vulnerable again. If you are closer to him, it's more likely he will become vulnerable. It's hard to give a definite strategy for this, because he is so random, your fight can last anywhere between 5-10 seconds to a few minutes.

With the usage of the Inventory Glitch, it is possible to despawn Zarok's soldiers. This glitch is banned in all categories. This is because it can create an unfair advantage to those runners who play on emulator - this glitch has been known to soft-lock the game on consoles.

It could, however, save a lot of time. This trick is semi-difficult to pull off and you only get one chance. When you approach the circle in the middle of the level, it triggers a cutscene for the first battle to begin. However if you jump onto the circle, using the inventory glitch, it will cause half of Zarok's army to spawn. To do this, slowly approach the edge then open the inventory. Once it's open, double tap SELECT quickly and between it opening and closing jump forward into the circle to trigger the cutscene. If you have done it correctly then your inventory will be open during the cutscene. See the video below for this in action: 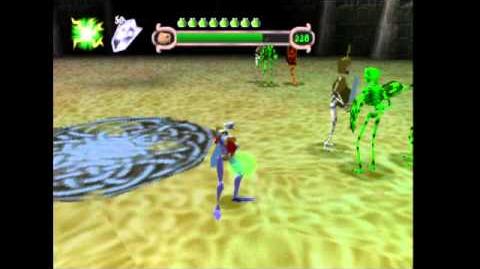 IMPORTANT: When the soldiers are fighting, if you approach the other side of the arena, this will cause the other half of Zarok's soldiers to spawn. If the battle hasn't finished then you will have to fight the other half as well!  So don't do that! In the video above demonstrating the glitch you see me spawning the other half. Once the battle is over you can do it for comedic purposes. Even though you have won the battle, Zarok's soldiers will celebrate and cry out in victory - they don't drop energy vials or anything, but it's amusing! If you do spawn them, once the Kardok fight begins, Zarok's soldiers will still be in the arena, but their models will be gone. They will still occupy a physical space in the arena though - basically they are invisible and you can bump into them like an invisible wall!

Retrieved from "https://gallowmere.fandom.com/wiki/Speedrunning:Zarok%27s_Lair?oldid=26926"
Community content is available under CC-BY-SA unless otherwise noted.