The Pumpkin Serpent is a level in MediEvil. Routes for each category are included under the sections below: 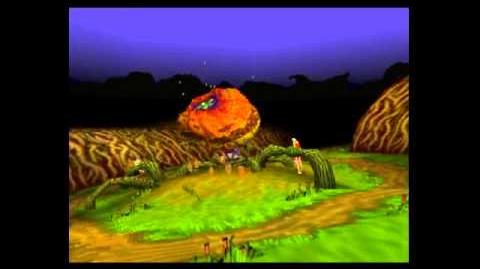 MediEvil - Any% Tutorial - The Pumpkin Serpent

The first two pods are before the well. There is another one ahead of you and one on either side. Then, moving towards the Pumpkin Serpent, destroy only the pod on the left (see Boss Fight for details). There are then two more pods behind the Pumpkin Serpent.

IMPORTANT: It's very important that you have a decent club% for this boss (This applies to both categories. You can then switch to Hammer in Glitchless but it's better to have the club!) otherwise the boss will be difficult to kill - this is extremely important for Any%, so make sure you lift the club in Scarecrow Fields!

The chalice is collected and the enchanted broadsword is used in the Boss Fight. No major glitches.

The boss fight is similar for all categories. In Any% and Any% Glitchless, you use the club. However in the 100% and Max% categories, you use the Enchanted Sword - you will have enchanted this in the previous level - Pumpkin Gorge.

All the pods must be destroyed for the boss fight to begin. You should leave the pod on the right side of the boss alive. You will notice that there are two skull chests to the sides of the boss. You MUST leave these chests intact - so don't hit them open.

So, there should be the chest on the right intact and then the pod. What you need to do is hit open the chest and quickly destroy the pod. The chest will release a wave of energy, which deals a lot of damage. When the chest is hit, however, the energy is not released immediately. This gives you time to destroy the pod. If you have done this correctly, then the energy will be released and will hurt the Pumpkin Serpent during its 'awakening' cutscene.

At this point, you should switch to the club or enchanted broadsword (depending on category) and hack away at the boss. This should kill the boss easily, as the energy blast that hit the boss during the cutscene severely weakened it.

Retrieved from "https://gallowmere.fandom.com/wiki/Speedrunning:The_Pumpkin_Serpent?oldid=26885"
Community content is available under CC-BY-SA unless otherwise noted.