The Hilltop Mausoleum is the fourth level in MediEvil and the first level to feature a boss fight. Routes for each category are included under the sections below: 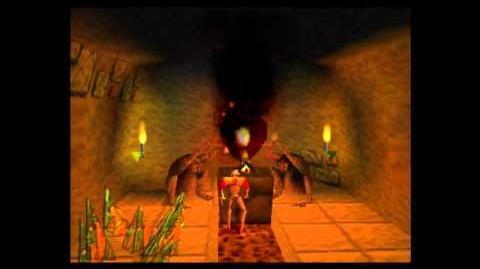 There are no major glitches for this level, so it's the same for glitched and glitchless. The level involves collecting the chalice and beating the level as normal.

The Stained Glass Demon is the easiest boss fight in the game.

There are two weapons which are used - the throwing daggers in Any% and the crossbow in all other categories.

The strategy is basically the same for both weapons. The Stained Glass Demon is only vulnerable when its heart is showing. At this point you either mash attack (

) with the Crossbow or you charge the Throwing Daggers (

) and throw them. The Crossbow is the quicker of the two weapons (can beat the Demon in two cycles), but the Throwing Daggers are all that is available to you in Any%! You should ignore all damage received when the Demon's heart is showing and just continue shooting. When it encases you in glass just shoot to get out of it.

The boss's attacks are fairly predictable and can be avoided.

Retrieved from "https://gallowmere.fandom.com/wiki/Speedrunning:The_Hilltop_Mausoleum?oldid=26876"
Community content is available under CC-BY-SA unless otherwise noted.