The Haunted Ruins is the eighteenth level in MediEvil. Routes for each category are included under the sections below: 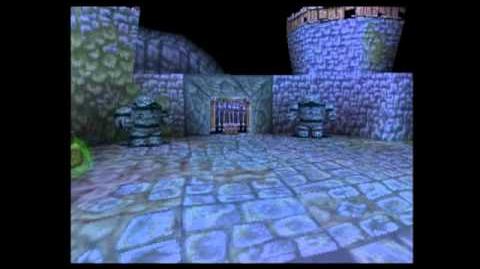 The route for this level is simply to get to the exit as fast as possible. In that respect, the goals are the same for both Any% and Any% Glitchless. Even though there will be differences in chalice collection and such between the two categories, there are no glitches to abuse in the level. Therefore, the route is the same.

In both cases, you will enter the level with the Dragon Armour on. There are only two enemies which need attacked (The Stone Golems), so there is no need to switch out weapons. You can either wait for the demons to open the gate for you or you can open it yourself. Don't worry about the captured farmers, they are only important in 100% and Max% runs.

The trick for killing the Stone Golems is using the Dragon Armour, as it can rapidly push them around with the flame breath. It's also possible to move them with the Daring Dash.

Enemies need to be killed for the chalice. No major glitches are used in the level.

This level has a level loop which is rarely used. At the start of the level, instead of waiting for the chickens, it is possible to level loop and bypass the bridge dropping.

Retrieved from "https://gallowmere.fandom.com/wiki/Speedrunning:The_Haunted_Ruins?oldid=26918"
Community content is available under CC-BY-SA unless otherwise noted.