The Freak Show is the third level in MediEvil 2. Routes for each category are included under the sections below: 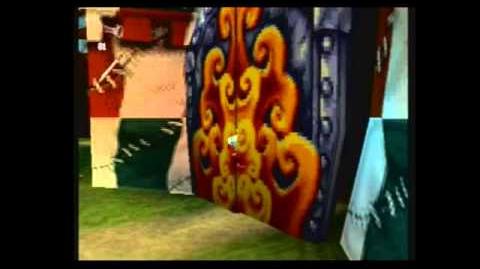 MediEvil 2 - Any% Route - Freak Show
This is not optimal, but it shows you the general idea of the route.
In Any%, this level is extremely short, as it allows you to skip both elephant keys by clipping through a door by using the speed glitch. Once you begin the level, you need to run to the area were the magician spawns (you can collect the life bottle before you enter, it is located to the left of the magician area through a door and along a path with a few imps). To kill the magician, it is best to charge up the small sword and when he becomes vulnerable, unleash the attack upon him.

After the magician has been defeated, go straight to the door of the large tent were the elephant keys are required. Position yourself on the right of the door, slightly angled towards the door and spam the speed glitch. As you approach the door, jump and you will get stuck in a tripping motion - looks like Dan is on an edge and is going to fall off. At this point, start spamming jump and the directions (up-right) towards the door (as if you want to go through it, if the door wasn't closed). You will then appear were the two doors meet. Keep spamming jump and the speed glitch to enter the tent.

The elephant is fought as normal (not particularly fast in the video, but for the illustrative purposes). Once the elephant has been defeated, exit the tent and then run to the exit.

Retrieved from "https://gallowmere.fandom.com/wiki/Speedrunning:The_Freakshow?oldid=26838"
Community content is available under CC-BY-SA unless otherwise noted.