Any%: Inside the Asylum
Other%: The Lake

The Crystal Caves is the sixteenth level of MediEvil. nbRoutes for each category are included under the sections below: 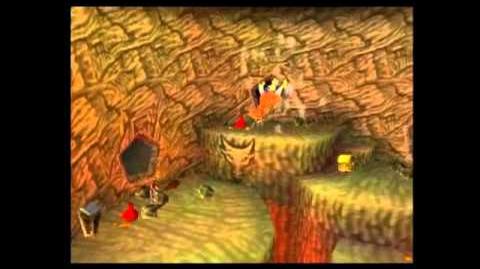 At the start of this level, you have to cross narrow platforms to get to the entrance of the cave. It's difficult to do this fast, due to the camera and the controls. Move the camera, then run and move the camera again so you can run in almost straight lines.

Once you get into the cave, you need the rune. Be careful travelling under the beams as they are pretty damaging. Also beware of Imps that can steal your weapons!

Once you get to the boss area, put in the dragon gems into the dragon motif on the wall and collect the energy vials.

Defeat the boss (see below).

Once you have the Dragon Armour, just keep it equipped and run to the exit.

The chalice needs to be collected. There are no major glitches in the level.

The Boss Fight is extremely easy - possibly easier than the Stained Glass Demon, and is the same for all categories. The dragon moves in a pattern around the arena. It sticks its head out and breathes fire. If you look at the ground below the holes, there are rocks lying on the ground. What you need to do is equip the club or hammer and hit the ground before the hole the dragon is at (hit the rocks). This will drop rocks down and hit the dragon. It's an extremely easy fight and it drops the dragon armour when defeated.

Retrieved from "https://gallowmere.fandom.com/wiki/Speedrunning:The_Crystal_Caves?oldid=26915"
Community content is available under CC-BY-SA unless otherwise noted.