Any%: The Enchanted Earth
Any% Glitchless: Scarecrow Fields
100%: The Ant Caves
Max%: Return to Dan's Crypt, then↑

Return to the Graveyard is the fifth level in MediEvil and the second level to feature a boss fight. Routes for each category are included under the sections below: 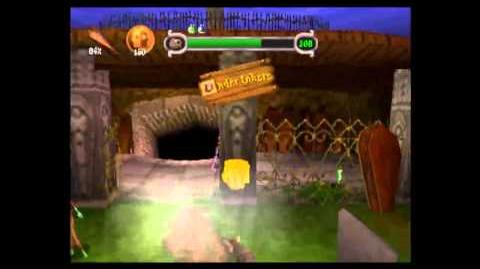 MediEvil - Any% Speedrun Tutorial - Return to the Graveyard

The route for this level is simply to run to the boss and defeat it. This video shows the routes for Any% (See: Note) and Any% Glitchless.

The only major thing to note about the level itself is that you don't need to push the blocks into the water to create stepping stones. You can just jump from the right ledge onto the bridge and continue to the boss.

Note: Any% has a skip which is only permitted in glitched categories, which is not shown in this video. This video shows the glitchless (easier) route as the skip can be tricky. This skip can easily be incorporated into this video's route and will be demonstrated in another video.

This level has a skip as noted in the video below, which is normally only permitted for glitched categories. It is not used in 100% or Max% Glitched as the chalice needs to be collected, so the enemies need to be killed.

The boss fight is the same, regardless of the category.

Before entering the boss arena, equip the club. The club is used, because it has a larger hurt box (than the hammer) and is basically a totally broken weapon. Once you enter, the wolves will jump down. Before they jump down, go to the right wolf. Once it's landed it's in a state were it isn't attacking yet. At this point start hitting its head with the club. You should be able to get it down to at least half health before the fight actually starts. Once they start jumping around just aim for their head with the club and they should easily die.

Retrieved from "https://gallowmere.fandom.com/wiki/Speedrunning:Return_to_the_Graveyard?oldid=26877"
Community content is available under CC-BY-SA unless otherwise noted.