Enchanted Forest, Haunted Ruins
Shadow Demons are unnatural creatures summoned by Zarok the Sorcerer from another dimension. After the Battle of Gallowmere in 1286, they were trapped in a tomb in the Enchanted Earth.

They are the wingless counterparts of the Flying Demons.

In 1286, Zarok summoned these creatures to help him build his castle and to help him invade the land of Gallowmere. After the Battle of Gallowmere, these dark, evil creatures were imprisoned inside a tomb located in the Enchanted Earth by a great hero. However, a hundred years later, Sir Daniel Fortesque was forced to release them so that he could progress on his journey to defeat Zarok. As soon as the Demons are out of their prison, they make their way to the ruins of Peregrin Castle where they imprison three farmers. Daniel eventually kills all the demons by releasing the lava held behind the castle's floodgates. 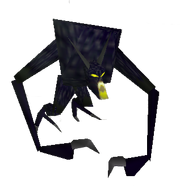 Shadow Demons in the Haunted Ruins level in MediEvil.

Retrieved from "https://gallowmere.fandom.com/wiki/Shadow_Demons?oldid=34464"
Community content is available under CC-BY-SA unless otherwise noted.