Renfields are enemies from MediEvil 2. They can be found in the Wulfrum Hall level.

These disgusting, bloated, flatulent oafs guard the Vampires during their daily slumber. As caretakers of the Hall, they'll toss Dan-Hand out the window if he is discovered. Although they might not look like it, they can actually put up a good fight. Fortunately, they are no match for your Sword.

Concept art of the scrapped version of the character. 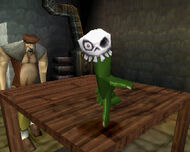 The early version of the Renfield with Dan-hand. 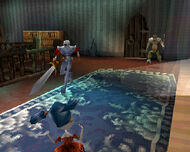 Another screenshot of an early version of the Renfield.

Retrieved from "https://gallowmere.fandom.com/wiki/Renfields?oldid=26564"
Community content is available under CC-BY-SA unless otherwise noted.