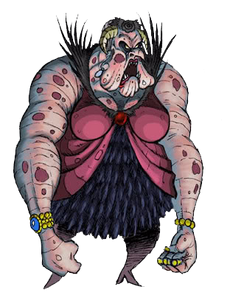 The Queen-zilla was to be the final boss battle in MediEvil 2, but was eventually replaced with a big demon.[1] The Queen-zilla was, in fact, a gigantic mutant Queen Victoria. She was to be controlled by Palethorn through his steam powered aircraft and fought in the cut Parliament level.[2]

Retrieved from "https://gallowmere.fandom.com/wiki/Queen-zilla?oldid=35054"
Community content is available under CC-BY-SA unless otherwise noted.