The Pumpkin King is Zarok's creation and his attempt at taking over Gallowmere's pumpkin lands.

The Pumpkin King was said to be the largest of all pumpkins. The Pumpkin Witch said that the Pumpkin King was a bad influence to the young seedlings, so she tasked Daniel with defeating him in exchange for the Dragon Gem. To awake the monster, Dan had to mash all of his pod sacks.

In the original MediEvil, the Pumpkin King is considered to be one of the easiest bosses in the game, since he doesn't move. The player can simply stand around him and use ranged weapons to lower his health quickly.

He has two main attacks. One is moving his tendrils around that may seem harmless, but will damage the player if he gets in contact with them. The other is throwing pumpkins that will explode after a short while or if they hit the player.

The Pumpkin King's weakness are ranged weapons, because he doesn't move at all throughout the battle. It is recommended that the player uses crossbow to kill the monster in the shortest amount of time. There are also two chests marked with the skull and crossbones (Smart Bombs) nearby too. Open them to damage the pumpkin with electric shocks. 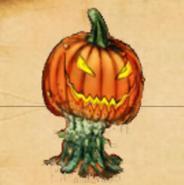 Add a photo to this gallery
Retrieved from "https://gallowmere.fandom.com/wiki/Pumpkin_King?oldid=33525"
Community content is available under CC-BY-SA unless otherwise noted.