Ghost Ship
The Pirate Crew are the Ghost Ship Captain's loyal men aboard the Ghost Ship. They are spineless sea dogs with a penchant for plundering who never complain, even cleaning the poop deck.[2]

There are two types of crew members on board the ghost ship that Dan encounters: 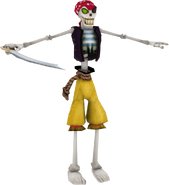 Retrieved from "https://gallowmere.fandom.com/wiki/Pirate_Crew?oldid=33953"
Community content is available under CC-BY-SA unless otherwise noted.