AU June 22, 2021[2]
US June 23, 2021[1]
CA July 12, 2021[3]
POP! Games: MediEvil - Sir Daniel Fortesque is a vinyl figurine produced by Funko Inc. The figurine was announced on June 4, 2021 to be released exclusively at GameStop in Europe and the US, EB Games in Canada and Australia, GAME in the UK and Super Gaby Games in Germany.[4][5] It features Sir Daniel Fortesque as he appears in the PS4 remake of MediEvil, wielding his own arm as a weapon. 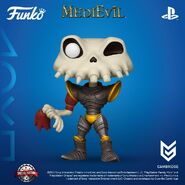 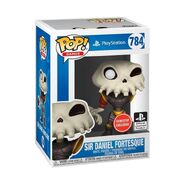