These strange creatures can take control over dead enemies or allies such as the Sailor Zombies and the Mullock cows. If you deal enough damage to the enemy while the octomator is controlling it, it will be lost from their control. If Daniel's body is detached from its head, the octomators can jump on top of it and possess it.

Killing them always leaves their corpse crushed, even if you don't kill them with the Hammer. 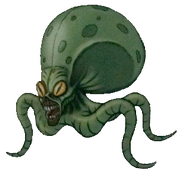