Mummies are Gallowmere's undead elite who have returned from the dead to walk amongst the living. They were buried in The Gallows Gauntlet, but some sources also report their presence in Dan's Crypt, Cemetery Hill, The Hilltop Mausoleum, and Return to the Graveyard.

They are mostly larger versions of zombies, only they move slightly slower, do much more damage to Dan (75 HP), and take many more hits to kill. For the record, all mummies are extremely combustible and therefore should not be subjected to flame attack, unless that is one wants to see them dancing around on fire for several seconds before expiring. 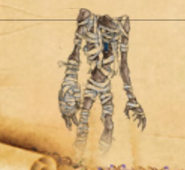 Retrieved from "https://gallowmere.fandom.com/wiki/Mummies?oldid=33511"
Community content is available under CC-BY-SA unless otherwise noted.