Phantom of the Opera

Mr. Organ is a ghost found in the Hilltop Mausoleum.

Mr. Organ can be found in a room east of the stained glass window. A nearby book reveals he is doomed to play the same chords over and over again. Daniel is tasked with finding Sheet Music for him so he can play a different tune. After bringing him sheet music, he plays the new tune and a nearby wall disappears to reveal the Chalice of Souls along with treasure chests. He then vanishes, laughing.

Mr. Organ in the original MediEvil.

The Phantom speaking to Daniel in MediEvil: Resurrection. 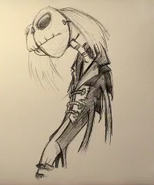