9AV (7AV, Inside the Asylum, 10AV)
Morten is a friendly worm that lives inside Dan's skull around the year 1386. He is thus forced to join Dan on his quest to defeat Zarok.

Morten is a purple earthworm who is about the length of Dan's finger. Like all earthworms his body is segmented. He has purple eyes and a little smile. In the PS4 Remake, his eyes are blue.

According to a book in the remake, Morten is described as being rather happy when Dan had died, as it gave him a new home. He is mostly unbothered by Dan coming back to life and is willing to help him, but mostly so Dan can go back to his eternal rest.

Morten was to have gotten a whole level to himself as he undertakes a perilous mission to steal a door key from the abbey of the mad monks. Morten would have had to navigate a range of obstacles and there would have been a few funny moments such as inching your way across the bare feet of prisoners (tickling them in the process) who would have been hanging upside down in racks.[1] The unused FMV was a prelude to this level. The unused track was also written for this level.[2] 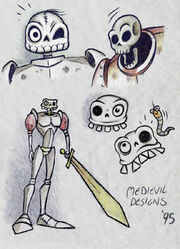 Morten in concept art of Dan.

Concept art of Morten's level.
Add a photo to this gallery 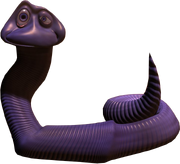 A render of Morten.

Morten in the 9AV FMV.

Morten in the 7AV FMV.
Add a photo to this gallery

Retrieved from "https://gallowmere.fandom.com/wiki/Morten_the_Earthworm?oldid=34576"
Community content is available under CC-BY-SA unless otherwise noted.