Megwynne Stormbinder is one of the heroes Daniel encounters in the Hall of Heroes. She appears both in MediEvil and its remake.

A full time mother and homemaker, Megwynne Stormbinder had to defend her settlement from barbarian raiders while the menfolk were away on a hunting trip. She fought off repeated attacks armed only with a pitchfork and a rolling pin and with one arm holding her baby. Legend has it that the Gods, impressed by her indomitable courage, intervened and added thunder bolts to her arsenal. She won the battle with a couple of bolts to spare on her husband when he finally returned.

Upon their first meeting, Megwynne gives Daniel some of her thunder bolts. When they meet again, she grants him three health vials. 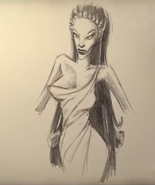 Add a photo to this gallery
Retrieved from "https://gallowmere.fandom.com/wiki/Megwynne_Stormbinder?oldid=34028"
Community content is available under CC-BY-SA unless otherwise noted.