MediEvil 2 has one main glitch which is used during speedruns: the Speed Glitch. This is only permitted in the glitched speedrunning categories. There is also a lot of general abuse of the environment and objects such as clipping through doors and walls.

The Speed Glitch is an extremely easy glitch to perform, but a difficult one to master.

To move in MediEvil 2, you normally hold the dpad or analogue stick and you walk/run in that direction. However, if instead of holding the dpad/analogue to move you repeatedly tap it instead in the desired direction, you will gain a ridiculous amount of speed. For example, If I wanted to move forward using the speed glitch, instead of just holding forward, I repeatedly tap it. This will allow me to increase my forward momentum. An example of the usage of the Speed Glitch can be seen in the video below. This video is not a particularly useful application of this glitch, but gives you an understanding of the speeds which can be reached and the ridiculous things you can do with it - generally such that you can clip through the level's geometry. 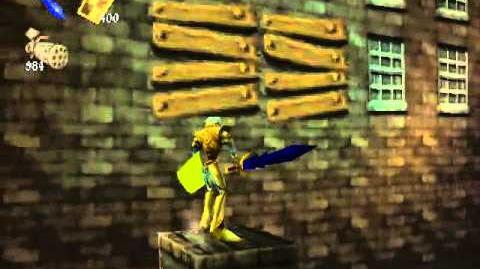 So what is a useful application of this glitch?

Since you move quicker using this glitch, it essentially replaces all normal movement. This is where it becomes hard to master, because you don't move the way you normally move in the game. If you want to go round corners you nearly have to anticipate the changes in direction - you cannot move diagonally. For example, say you wanted to turn left at a junction. You would have to repeatedly tap forward to approach the junction, then tap left to turn left into the junction and then start tapping forward again. In that respect you always want to be tapping forward and any direction change you tap that direction and return to forward.

The other most useful aspect of the Speed Glitch is in using it to reach places you normally couldn't or to increase your velocity so you can jump further. The video below shows an example of this in the Greenwich Observatory Level. 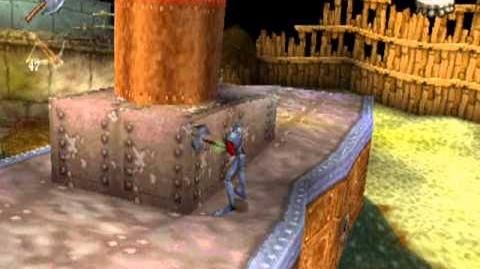 MediEvil 2 - Speed Glitch - Greenwich Observatory
Normally, to reach this boat in the level, you would have to fetch Dan's head from the bird (You don't even need Dan's head to finish the level, it will just reappear on his shoulders next section!), then use it to solve a puzzle in another boat to lower the bridge to gain access. This can all be skipped using the Speed Glitch. By gaining enough speed, it is possible to jump the gap between the boat and the pier and land on the boat.

So, how is this speed achieved in such a short distance?

In both videos on this page, you will notice that Dan is running up against an object before moving off at high speed. It is by running into walls that speed can be gathered. If you run at a wall by mashing forward towards it, then you will gain an insane amount of speed. Even greater speed can be gained in the air.

The direction you move when running against the wall is determined by how you face the wall. If you position Dan facing the wall slightly to the left, as you gain speed he will rapidly move to the left. This is what is happening in the Greenwich Observatory video. Dan is positioned facing slightly to the left (not too far left or he would just run straight to the left, we need time to gather speed!) and forward is mashed. As speed is gathered, he rapidly moves left and then out past the wall. At this point forward is still being mashed.  Now to jump, you have to hit

early, otherwise you will just fall off the edge. Think of traveling at high speeds, if it is fast approaching you need to act early in anticipation!

Retrieved from "https://gallowmere.fandom.com/wiki/MediEvil_2/Glitches?oldid=22393"
Community content is available under CC-BY-SA unless otherwise noted.