MediEvil is a series of action-adventure hack and slash video games produced by SCE Cambridge Studio and Other Ocean Interactive. The main protagonist of the series is a cowardly, skeletal undead knight, Sir Daniel Fortesque.

The name of the series is a portmanteau of medieval and evil. It comes from the original title of the third Evil Dead film Army of Darkness, which was The MediEvil Dead.[1] 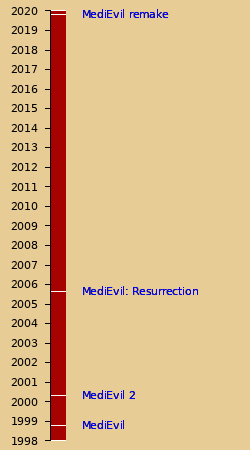 MediEvil is the first installment in the series. It was released in Europe and North America in October 1998. Zarok, an evil sorcerer attempts to ensnare the land of Gallowmere under his evil reign, but unwittingly brings his old nemesis, Sir Daniel Fortesque, back to life. The player takes control of Sir Dan who must face hordes of zombies, pumpkins and other monsters as he traverses through Gallowmere.

MediEvil was one of the first games to support a DualShock controller on the PlayStation.

MediEvil 2 is a direct sequel to the first game and is the second installment in the series. It was released in North America in April 2000 and in May 2000 in Europe. It takes place 500 years after the first game's events. It is set in victorian London and features a lot of improvements over the original, including improved enemy AI, increased strategy combat, bigger and more detailed levels, more powerful and diverse range of strategic weapons, more playable characters, more player control and improved characterisation and storyline.[2]

MediEvil: Resurrection is the third installment in the series. It is a reimagining of the original MediEvil. It was released in North America and Europe in September 2005 as a PSP launch title. Many things such as level design, characters, and plot elements were changed drastically. Some levels from the original were not included at all while completely new levels and characters were introduced. Half of the soundtrack is also completely original and fully orchestrated. The game is also much more comical and cartoon-styled than its predecessors. Also, unlike the previous two games in the franchise, there is no alternate ending regardless of whether the player collects all the chalices.

MediEvil is the fourth installment in the MediEvil series. It is a remake of the original MediEvil. It was announced on December 8, 2017 at PlayStation Experience 2017. It was released on October 25, 2019.

MediEvil: Fate's Arrow is a comic taking place during the events after MediEvil 2 and before MediEvil, serving as both a prequel and a sequel to the series. The digital version of the comic was released on October 25, 2019 with the Digital Deluxe Edition of the MediEvil remake.

According to MediEvil developers Jason Wilson and Dominic Cahalin, a French company was interested in creating a television show based on the MediEvil universe around the time of MediEvil: Resurrection's development. However, the show was never produced.[3][4]

The MediEvil series has received mostly positive reviews over the years, with the latest releases receiving more mixed reviews in general.

Retrieved from "https://gallowmere.fandom.com/wiki/MediEvil_(series)?oldid=35223"
Community content is available under CC-BY-SA unless otherwise noted.