MediEvil: Fate's Arrow,[1] also known as MediEvil: The Comic Prequel[2] as well as MediEvil: The Battle of Gallowmere in Italy,[3] is a one-shot comic that serves both as a direct sequel to MediEvil 2 and a prequel to MediEvil. A digital animated version of the comic was released on October 25, 2019 as part of the Digital Deluxe edition of the MediEvil remake. A physical hardback edition was released on December 3, 2019 by Titan Comics, with some retailers stocking it early.

MediEvil: The Comic Prequel tells the story of Sir Daniel Fortesque after the ending of MediEvil 2. Travelling back in time Sir Dan encounters his original, living self and (re)experiences the events leading up to the legendary battle in which he first lost his life. He must work with some old friends and battle some old foes if he is to save his kingdom and seal his status as the Hero of Gallowmere.[2]

A mysterious man meets with Professor Darrow in Cambridge. He begins recounting the story of what happened to Sir Daniel Fortesque after the Autumn of Death in 1886. He explains that Sir Dan and Princess Kiya used Professor Hamilton Kift's time machine to travel through time. However, the machine malfunctioned and separated them.

Sir Dan ends up in Gallowmere in 1286, just a day before the Battle of Gallowmere. He sees his living self give abuse to his hound, Lupo. He follows the living Dan into Castle Peregrin where he is summoned by the king.

The king explains that the army of the undead is marching towards the castle and that they will attack within a day. The undead Dan secretly observes the scene from a window, but Zarok closes it, making the undead Dan fall.

Panic ensues on the ground as people presume that the undead attack has begun. Dan dashes into an alley where he meets his living counterpart's second-in-command, Canny Tim. Tim takes Dan to meet with the fairy Griff who explains that a Jabberwocky will attack the castle later in the day. They formulate a plan to defeat it.

Canny Tim heads to the castle's Weapon Requisitions to obtain a weapon that can kill the Jabberwocky. The Requisitioner is uncooperative however and Tim is forced to break and steal the Magic Sword of Dirk Steadfast.

Meanwhile, Dan and Griff head to the living Dan's chambers where they knock him out and steal his fancy armour. Dan jumps out the window of the castle to face the now attacking Jabberwocky. Tim tosses the Magic Sword to Dan using which he is able to cut off the Jabberwocky's head.

Late at night, Dan is leaving the castle wondering if he'll ever see Princess Kiya again. He is jumped by Zarok and his henchmen, Boris and Merek. Zarok orders them to take Dan far away from the castle to a place called the Mystic Maidens.

At the Mystic Maidens, Boris and Merek get ready to kill Sir Dan. However, before they can do anything, they are killed by Lupo, now transformed into a werewolf. Griff explains that Lupo is a were-dog and that he used fairy magic to make Lupo recognise the undead Dan as his master.

Griff introduces Dan to his sister Noreen who has a plan to ensure the Battle of Gallowmere happens as it should. She proposes that Dan needs to trade places with his living self by drinking a Body Swap Potion that her friend Wartilda can make for them.

Using her fairy magic, Noreen teleports Dan to Kiya's tomb where he obtains one of the ingredients for the Body Swap potion and says his goodbyes to Kiya. After his return, the party is attacked by Zarok. Once Zarok's attack is repelled, Dan proceeds to swap bodies with his living self.

The next morning, Dan and Canny Tim head into the castle to prepare. When they arrive on the battlefield, Dan explains Zarok's duplicity to the king and gives a speech that boosts the morale of the troops. Finally, Dan dies as he knows he should and his story ends.

Professor Darrow is amazed by the mysterious man's story and asks him how he knows about it. He reveals himself as a version of Sir Daniel Fortesque, now sporting an Egyptian eye prosthetic, Kiya's parting gift.

Development began some time in 2018[4] after Jason Wilson, who served as Lead Artist and Game Designer on the original MediEvil, was approached by George Weising, Senior Managing Producer on the MediEvil remake, about working on an animated prequel comic that would accompany the remade game. Jason then asked Chris Sorrell, the Producer on the original MediEvil, to work with him on the comic.[5]

The story for MediEvil: Fate's Arrow was originally conceptualised by Chris Sorrell back in 2003 as a sequel to MediEvil 2.[5][6] However, the comic version does feature significant changes from the original 2003 outline. The story takes place over the course of two days instead of three weeks, Kiya is not revealed to be the evil sorceress Kiyante and many characters and locations do not appear in the comic, likely to keep the story more focused and concise.

Wilson left Sorrell to write the initial script for the story on his own but asked him for an outline upfront so that he could make notes and suggestions. Sorrell provided Wilson with a draft of the story in comic form which they transformed into a rough panel form version, leaving Wilson with the task of finalising the artwork.[5] The animated version of the comic was then brought to life with help from Mayene de La Cruz, Art Lead at SIE Worldwide Studios.[7]

It was important for both Sorrell and Wilson to release the comic in a physical format.[8] Due to his past experience of working with Titan Comics, Wilson was able to secure them as the publisher for the hardback version of the comic. Wilson officially unveiled this edition on his Twitter account on August 16, 2019.[9]

Sales data for the digital and physical versions of the comic is largely unavailable. However, according to Comichron, an estimated 269 units of the comic were sold to North American comics shops by Diamond Comic Distributors in December 2019.[10] 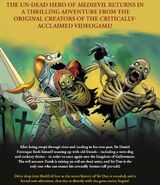