MediEvil has two main glitches used during speedruns: the Inventory Glitch and Level Looping. Both are only permitted in the glitched speedrunning categories. There are also two other glitches which are not used as often during speedruns.

When a player presses SELECT, the inventory will open. This is used to select weapons and items. SELECT then closes the inventory again. If you open the inventory and then close it quickly (double tap), there is a brief window in which the player can input commands to allow you to move, jump, attack etc. When the inventory is open, Dan is invulnerable. This glitch is useful with regards to the second glitch: Level Looping.

If you close the inventory while you are falling, you will die instantly and be put back at the spot from which you jumped; however, if you hold

and then close the inventory, you will not die. In fact, you will be teleported to the top of the level, where you will be able to use the directional buttons to move about whilst falling.

This is the basis for reaching the exit trigger. There are multiple uses of level looping in the game. Some are used to skip to the exit of the level. Others are used to skip an enemy encounter which is needed to progress.

The levels where looping is possible are the following:

Level Looping as explained by Torn338 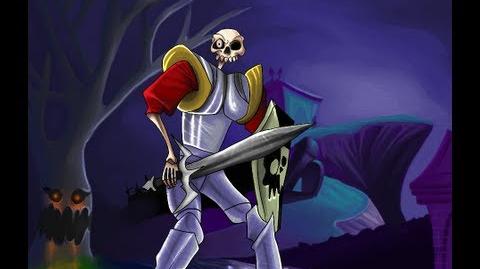 The "Knock Back Dash" Glitch

) can be used on walls and certain objects to push Dan back. That in conjunction with turning, the daring dash, and running can increase Dan's speed much higher than normal.

It is possible to perform a glitch after your weapon is stolen that involves tricking the game into maxing out its percentage or ammo count by causing it to underflow.

Retrieved from "https://gallowmere.fandom.com/wiki/MediEvil/Glitches?oldid=27714"
Community content is available under CC-BY-SA unless otherwise noted.