The Mean Old Dragon is the keeper of the Dragon Armour and a very heavy sleeper who resides in the Crystal Caves. He's a rather erudite and neurotic dragon (of the Dragon chattering classes). This beastie cannot abide adventurous types, so one should not be too hopeful of a friendly welcome, or indeed a generous send off for that matter.

Perhaps the last remaining dragon? A fearsome, indomitable beast with absolutely no vulnerabilities, apart from that one cranial fracture he sustained from waking up with a start and banging his head on the cave roof. Good thing no one will ever find out about that!

Dragons were once hunted for their blood, which is said to grant the power of fire-breathing. This particular dragon's solitude stems not from fear of hunters, but from his crippling social anxiety.

The Dragon King cannot abide adventurous types, so one should not be too hopeful of a friendly welcome, or indeed a generous send off for that matter. To earn an audience with this impressive beast a would-be plunderer should crack him repeatedly on the head with dislodged debris. Eventually the vexed dragon is likely to emerge into the cavern ready for a full on fight. During the ensuing battle one must maneuver with care and precision, after all, aggressively issued fire and wind can be a most lethal combination! Utilizing the giant floor crystals as protective aids may prove most beneficial in terms of short-term survival, and may just offer up the edge needed to defeat this upper-middle-class twit.[1]

The Mean Old Dragon cannot be hit with melee or projectile weapons since he hides behind the walls of the cave. When he's ready to attack, he sticks out his head and breathes fire towards Dan. There are several platforms around the room. Hitting them with the hammer causes a few rocks to fall from the ceiling. Dan has to hit the platform that causes rocks to collapse onto the platform where the Dragon's head currently is in order to deal damage to him. After his defeat, the Dragon will claim to have a headache and will give Dan the Dragon Armour to make him go away.

Defeating the Dragon is similar to the way it is done in MediEvil. When a rock successfully hits the dragon's head the hole from which it was attacking will be covered by the rock, but the rock will be dropped after a while. Once all the holes are covered up, the Dragon will come out of hiding and fight Daniel from a closer range. He has 3 types of attacks:

It is recommended to hide behind the surrounding crystals and wait until he is done with his attack before attacking him. 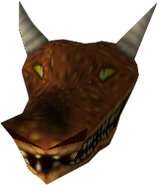 Render of the Dragon's head from the official MediEvil website.

Concept art of the Dragon's lair. 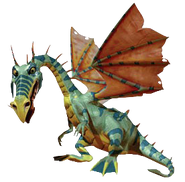 The Dragon in MediEvil: Resurrection. 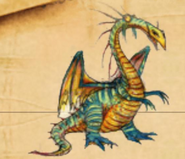