Lord Kardok (died 1286) was Zarok's Champion in life. He was killed by legendary hero Canny Tim during the Battle of Gallowmere, but was eventually resurrected by his master to do his bidding in death before being slain once more, this time by the Hero of Gallowmere Sir Daniel Fortesque.

Little is known about Kardok's early life, save for the fact that his parents didn't allow him to attend clogging lessons with his sister, which might have led to his violent disposition in later life.[1] At some point, Kardok affiliated himself with the evil sorcerer Zarok, becoming his champion. In 1286, he fought at the Battle of Gallowmere where he met his demise at the hands of Canny Tim who shot him in the eye from a thousand yards away.[2]

Some sources describe a very different Lord Kardok - a centaur who favored the bow and who was personally responsible for the death of Sir Daniel Fortesque, King Peregrin's Champion, at the Battle of Gallowmere.

By 1386, Kardok had been resurrected by Zarok to continue serving him. When Sir Dan finally reached the sorcerer's lair, Kardok was sent out to deal with him. He was no match for Fortesque however, which resulted in his final demise.

In death, Lord Kardok appears as a tall skeletal knight wearing purple armor and a horned helmet. His eyes glow red. He rides a fiery skeletal steed into battle while wielding a magical flail. 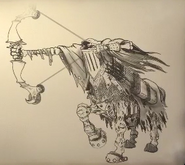 Retrieved from "https://gallowmere.fandom.com/wiki/Lord_Kardok?oldid=35027"
Community content is available under CC-BY-SA unless otherwise noted.