King Peregrin (c. 1218 – 1286) was the last monarch of Gallowmere. The kingdom prospered under his reign until a famine forced him to hire a new court magician - the evil sorcerer Zarok. Zarok manipulated the King using his magic until the day of the Battle of Gallowmere where Zarok's army of zombies and demons fought the King's Militia. Although the day was won by the King, his champion, Sir Daniel Fortesque, was the first to fall in the battle, greatly embarrassing him. To save face, the King declared Sir Dan a great hero and attributed the day's victory to him. King Peregrin passed away not long afterwards, though not before designing an impregnable box that would house Zarok's nigh indestructible Shadow Demons.

A hundred years later, the King's ghost would aid his resurrected champion in a quest to defeat Zarok once and for all by helping him destroy the castle and the recently released Shadow Demons with it.

Peregrin ascended to the throne of Gallowmere when he was 15 after the sudden passing of his father. For 50 years, Gallowmere thrived under Peregrin's rule until the year a terrible famine struck. The King tried everything he could to save his people, but the famine would not pass. He tasked his court magician, Mazok the Muddled, to come up with a magical solution, but this backfired and resulted in the creation of a chicken-dragon monster known as the Jabberwocky. In the end, the King had no choice but to accept aid from a newcomer to his court, the sorcerer Zarok. Zarok did resolve the famine and used this fact to install himself as the King's new Court Magician. Under Zarok's counsel (and magical possession), the King would appoint Sir Daniel Fortesque as his new champion.[2]

In the year 1286, an army of undead began its march towards Gallowmere. The King relied on his champion to save the day, though he had doubts about Fortesque being the right man for the job. Those doubts were magically dispelled by Zarok, who planned for Fortesque to lead the charge, dooming the King's army.

The King would later be surprised as Fortesque seemingly repelled an attack by the Jabberwocky.

The day of the battle against the undead, the King awaited Dan and his Court Magician on the field. When Sir Dan finally showed up, the King asked after Zarok as he was surprised by his absence. Dan revealed Zarok's duplicity to Peregrin and boosted the morale of the soldiers by giving a rousing speech. Despite this, Daniel was the first to fall in the battle, although the army was ultimately victorious. Realizing his subjects needed to feel safe and to honor Dan's memory, Peregrin declared that Daniel had defeated Zarok before his demise. A hero's tomb was soon erected to Dan, the history books inscribed with tales of his valor.

Sadly, Peregrin would pass away a few days later by choking to death on a Brussels sprout, though not before designing a prison for Zarok's Shadow Demons.[1]

Daniel encountered King Peregrin's ghost while traveling through the Haunted Ruins on his way to defeat Zarok. After Dan obtained the King's Crown from a room below the throne room and placed it on the throne, the King's ghost suddenly appeared. The King was surprised to see Dan and told him that he must release the lava behind the floodgates to defeat the Shadow Demons that overran the castle ruins. Some scholars also believe that Peregrin was one of the four holders of a piece of the Anubis Stone, which he gave to Dan.

King Peregrin is a friendly, chatty, old gentleman with a military background. He enjoys playing croquet, philosophy, literature, and according to some sources, pictures of kittens in bonnets. He seems to have complete trust in Dan even after his failure and treats him kindly. In life, he believed that the dead are not supposed to be experimented on for which he allegedly banished Zarok from Gallowmere, though the veracity of this is unknown. 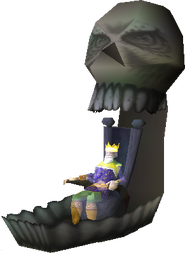 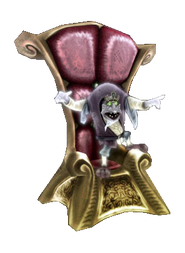 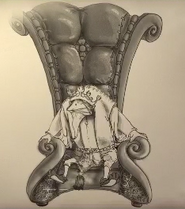 Peregrin in the PS4 remake.
Add a photo to this gallery

Retrieved from "https://gallowmere.fandom.com/wiki/King_Peregrin?oldid=34421"
Community content is available under CC-BY-SA unless otherwise noted.