9AV (10AV, The Silver Wood)
The Jabberwocky was an immortal chicken-dragon hybrid created by a failed magical experiment. Originally chased from the kingdom of Gallowmere by hero Dirk Steadfast, the Jabberwocky would cross paths several times with Sir Daniel Fortesque, the Hero of Gallowmere. It was last seen falling off a cliffside.

Many years ago, the foolish sorcerer Mazok the Muddled came into possession of a Dragon Egg. At the same time, Gallowmere was suffering under a terrible famine, and Mazok had been ordered by his king to seek out a magical solution. 'If only the kingdom's scrawny chickens could lay eggs the size of a dragon egg', thought Mazok, and he set about applying his questionable skills to transform the egg.

Several days later the kingdom had been saved! The hatched chicken-dragon - or Jabberwocky as it came to be known - possessed the ferocity of a dragon and the dim wit of a chicken. It rampaged through the kingdom on a murderous spree and killed so many that even the meagre harvest was enough to sustain the survivors (as they mourned their loved ones).

The Jabberwocky was finally chased from the land by the hero Dirk Steadfast who poked it with his magic sword.

In 1286, one day before the Battle of Gallowmere, the Jabberwocky attacks King Peregrin's Castle and Gallows Town. However, Dan manages to chop its head off using Dirk Steadfast's Magic Sword, ending the attack.

The Jabberwocky was to feature in a chase level with Dan pursued by it. Snippets of the level can be seen in one of the game's trailers. The level was replaced with the 9AV FMV.[1] 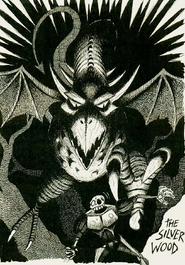 Concept art of the Jabberwocky.

CGI and wire-frame model as seen in "The Making of MediEvil".

The Jabberwocky, as seen in Zarok's spell book during IntroAV.

As seen in the annotated version of MediEvil's promotional trailer.

The Jabberwocky chasing Dan (and Morten).