Abbey of the Mad Monks, Dungeon

The Awakening (PROTOTYPE: IG4[1]) (1998)
Mix track consisting of Badly Decomposed Brain and remixes of Killing Time and Killer Corn (or is it Wheat?) (2019)

Inside the Asylum (地下牢, Chika rō?) is a level in MediEvil.

At first, you will be attacked by madmen. Run all around the room to make sure you kill them all. Then, items will appear for you. From the double doors, going left, you then find a bag of coins, an Energy Vial, a Merchant Gargoyle in a cell, and another Energy Vial. More madmen and zombies will appear. Kill them all and the double doors will open. Stand next to the circle in the middle of the room, press and hold

, then look down to see a picture. Exit the room.

Be careful of the cannons on the wall as they do aim for you. Do not fall into the stream of lava or you will lose what is in your life meter. At first, you must deal with the madmen on the left. Zombies will start to appear on the right, and zombies will follow the madmen on the left. Kill everything on your side, then jump over the stream of lava and kill the zombies there. Then, madmen and zombies should rush out on both sides and a chest should drop down for you. The chest has a skull and crossbones on it. Hit to it release the time bomb, then jump back over onto the left side to run away from the time bomb. That time bomb should kill all the rest for you. Jump back over onto the right and exit through the doorway that just opened up for you.

On your side, you find a bag of coins on the floor, a bag of coins on a table, the Chalice, and the Earth Rune. Drop down and jump up onto the other side to find a fountain. Walk into the green hand of the cell to use the Earth Rune, then enter the cell. The Mayor should speak to you and then the exit door will open. Pick up the Dragon Gem from off of the table in the cell. Exit this room in the upper left.

Run to the end of the hall and go upstairs. This time you have the two choices that you did not pick the last time. Feel free to speak with both of them. Just make sure not to accept anything until you are sure of the one you want.

The fellow holding an axe is Bloodmonath Skull Cleaver. He will give you an Axe. It normally works up close, but the Square button allows you to throw it sort of like a boomerang. So, you do not need to buy more.

If you speak to Ravenhooves again, you will get the Flaming Longbow. It comes with 100 Flaming Arrows. You can buy more Flaming Arrows from the Merchant Gargoyles. It cannot be powered up.

If you speak to the fellow with the large shield, Karl Sturnguard, you will get the Gold Shield. Even if the Gold Shield reaches 0, you can have it fixed by the Merchant Gargoyles. So, you will never lose this shield.

A lusty adventurer in his heyday, this once-beloved mayor stole the Shadow Artifact from Zarok's tower after the disgraced sorcerer was banished from the kingdom.

When Zarok returned, so mad was he that he tore the whole town apart in his wrath, turning many of the good townsfolk into goats. After that, the mayor's approval ratings fell dramatically. His reelection now seems unlikely (although these days, it seems anything is possible).

With the disappearance of the head monk, these patients have been left to run amok.

We don't know exactly what it was that sent them raving mad. Perhaps it was magic, perhaps the moon, or perhaps they were all licking toads. Truly, you should NOT lick those toads.

They're vampire bats. Actually, they're just bats. But they bite. That's sort of vampirey.

19 Town Mayor:
By 'eck, am I glad to see you! That Zarok tried to force me to hand over the Shadow Artefact - he means to release the Demons from their tomb under the Enchanted Forest.
But I said to him, I said 'You can't touch me, you lanky windbag, I'm the mayor.Aye, that told him... But then he had me locked up in here with all these nutters. Oh, it's been terrible - I haven't managed to get a word of sense out of anyone in weeks!

153 Sir Daniel Fortesque:
Tell me about it!

120 Town Mayor:
Right, well I'll see myself out, thanks. You have a good look around, lad, Zarok's left some stuff lying about that I think you might find useful. 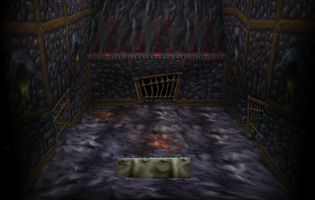 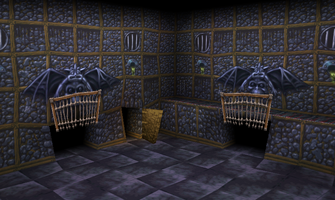 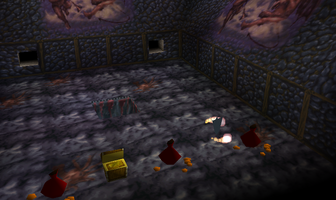 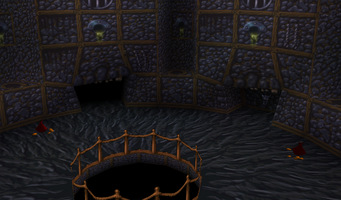 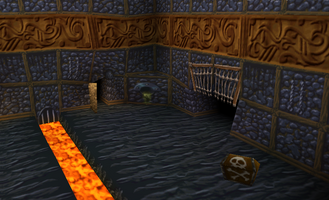 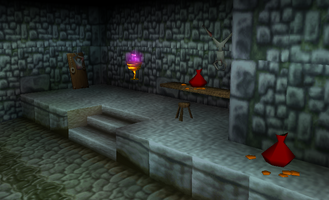 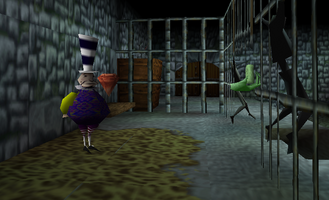 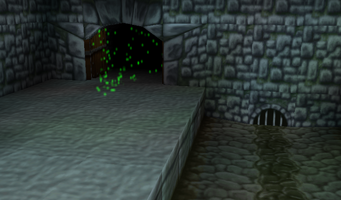 Retrieved from "https://gallowmere.fandom.com/wiki/Inside_the_Asylum_(MediEvil)?oldid=34799"
Community content is available under CC-BY-SA unless otherwise noted.