Warrior Queen of the Amazons

Imanzi Shongama is one of the heroes who resides in the Hall of Heroes. She appears in MediEvil, its remake, and MediEvil: Resurrection.

Trained from birth in all forms of combat, Imanzi Shongama was the warrior queen of a tribe of Amazons. The bold and the beautiful Shongama banished all males from her territory except the handful she kept on to mow the lawns of her people.

Sir Dan gets to meet Imanzi after collecting at least seven chalices on his quest to defeat Zarok. Imanzi gives Daniel her spear to use. After collecting seventeen chalices, she rewards Dan with two energy vials. She is also mentioned in the fifth chapter of HEROES FROM HISTORY: A Retrospective, which Daniel can read in The Sleeping Village library.

Imanzi is described as being bold in HEROES FROM HISTORY: A Retrospective. She is very flirty towards Dan, much to his dismay. She thinks all men are weak and feeble and loves it when they don't talk back. 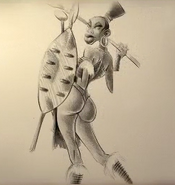