Return to the Graveyard, Sleeping Village

The Graveyard Wolves are a family of wolves living past the Skull Gates of the Graveyard.

By 1386, Gallowmere's wolves had been hunted to the point of extinction by vengeful farmers.[1] The last family of wolves had made their home in Gallowmere's Graveyard, but was slaughtered by Sir Daniel Fortesque after they attacked him for passing through their territory.

The wolves are usually found sleeping, which gives Daniel a great fighting advantage. Once they awaken, they are quite dangerous. They can move rather quickly and their attacks are stronger than that of the zombies. 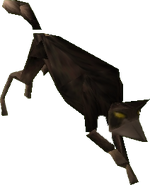 Wolves in the MediEvil Rolling Demo.
Add a photo to this gallery

Retrieved from "https://gallowmere.fandom.com/wiki/Graveyard_Wolves?oldid=33265"
Community content is available under CC-BY-SA unless otherwise noted.