The Pirate Captain, also known as the Ghost Ship Captain, is the overly zealous captain of the Ghost Ship. He overreacts to having a stowaway on board, forcing his crew to attack Sir Daniel Fortesque instead of simply reprimanding him and dropping him off at the next port.

This boss battle is tough. The Captain barricades himself behind barrels and is thus invulnerable to Dan's melee weapons. He's invulnerable against Dan's ranged weapons, too. The only way to defeat him is to light the fuse on the nearby cannon(s) with your club and try and hit the captain with its cannonballs. The Captain himself doesn't really harm Daniel in any way, but groups after groups of pirates keep spawning in the area. It is recommended to take them out before attempting to shoot the Captain. Time your attacks right and you'll defeat him in no time. 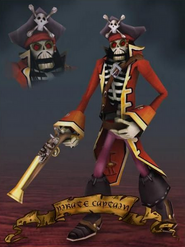 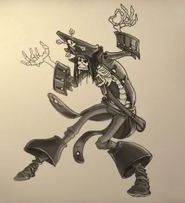 Retrieved from "https://gallowmere.fandom.com/wiki/Ghost_Ship_Captain?oldid=34953"
Community content is available under CC-BY-SA unless otherwise noted.