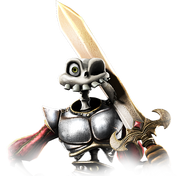 Sir Daniel Fortesque is the main protagonist of MediEvil, appearing as the main protagonist in all the games in the series up to date. He is voiced by Jason Wilson in MediEvil and MediEvil: Resurrection and by Marc Silk in MediEvil 2.
A coward whose celebration as a hero was unearned, Sir Dan has been given a chance to redeem himself, proving in combat he is worthy of his knighthood. He fights on behalf of his beloved homeland, Gallowmere, his oath to protect her intact despite her citizens’ somewhat waning interest in gallantry.
Full article...  All featured articles...

To write a new article, just enter the article title in the box below.

If you want your Wiki to be affiliated with this one, please contact one of our administrators!

The Gallowmere Historia is not affiliated with, nor is it endorsed by Sony Computer Entertainment.
Portions of licensed material are used on this site in a way that qualifies as fair use. All trademarks go to their respective owners.
Retrieved from "https://gallowmere.fandom.com/wiki/Gallowmere_Historia?oldid=32207"
Community content is available under CC-BY-SA unless otherwise noted.