Gallowmere was one of the nine kingdoms of Medieval Britain famed for its lush green countryside, fair rulers and kindly people.[1] It was home to many mystical, mythical creatures, like Dragon Toads, Rhinotaurs and Dragon Birds. MediEvil, its remake and MediEvil: Resurrection take place in Gallowmere.

Gallows Town (also known as The Sleeping Village) is a town lying near the center of the island. Not much is known about the town. Its inhabitants were possessed by Zarok in 1386. The town has a library, church, pub and smithy.

Castle Peregrin (also known as The Haunted Ruins) was once Gallowmere's seat of power and home to the royal household, before it fell to ruin and became abandoned. There is lava underneath the castle which is held back by a set of floodgates.

Mellowmede (also known as The Lake) was once a town of arcane alchemy, before being destroyed by Rhinotaurs and flooded by the murky swamps. The ancient people of this long vanished town once sought to harness the power of Crystals within the Crystal Caves. The city now lies in ruin.

The City of Madness (also known as The Time Device) is a city built by Zarok using the darkest of magics. The city is home to many of his obscure inventions, including his boiler guards. Another notable invention is a train, which he uses to travel around the city faster. In the middle of the city lies Zarok's Lair, his personal domain. 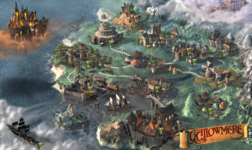 Map of Gallowmere in MediEvil: Resurrection. 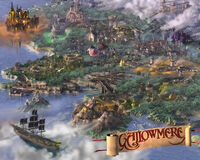 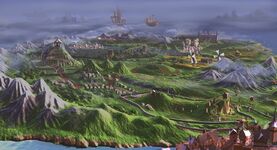 Overview of Gallowmere in MediEvil (1998).