The Fazguls are Zarok's elite bodyguards. Sir Dan is forced to fight them in Zarok's Lair.

The Fazguls cannot be defeated by mortal weapons. Before the battle begins, Daniel summons his own army to fight them using the Chalice of Souls (or the Anubis Stone according to some accounts). The two forces will battle and Daniel will be able to assist his army by healing them using the Good Lightning. The colour of Daniel's troops indicates their remaining energy - the redder they are, the closer they are to dying. Take care, however; the Good Lightning will drain you of your own energy to heal your troops. If you're healing them correctly, your army should slowly defeat Zarok's Fazguls. After the battle is over, they will warp away, leaving behind an Energy Vial for Dan to heal up. 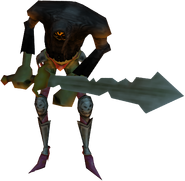 Retrieved from "https://gallowmere.fandom.com/wiki/Fazguls?oldid=33456"
Community content is available under CC-BY-SA unless otherwise noted.