The Fairies are baby-faced gangster forest folk. Some of them are trapped in the Ant Caves in MediEvil and the remake, while they are found loitering about with Faerie Fungi in the Enchanted Forest in MediEvil: Resurrection.

Those who claim to have seen fairies typically describe them as beings of intense grace: of light and beauty, poise and virtue. These are not the fairies of Gallowmere.

In Gallowmere, the fairies may still be tiny magical beings, but these are rather more 'earthy' souls. Above all else they live to party, celebrate life through drunken revelry and debaucherous excess. However, they are also kind hearted and will always do their best to help in the fight against evil.

Fairies are the Guardians of Fate, making sure things happen as they are supposed to. They exist outside of time and are able to flit through it as they choose (albeit prohibited from physically altering the world around them). Only a few mortals are able to see fairies unless those fairies choose to be seen.[1]

Fairies were supposedly the leaders of the underground world until the Ant Queen invaded their territory and imprisoned them.[2]

After entering the ants' nest to collect amber for the Forest Witch, Daniel is tasked by the fairy Nigel to rescue six other fairies from the nest in return for a free visit to the Hall of Heroes.

When Dan enters the Enchanted Forest, he finds a cauldron at its outer edge where he summons the recluse and ill-tempered Witch of the Forest using the Witch Talisman. The Witch is brewing a potion that will cure the Pumpkin Witch he met earlier of her malady. To do so, she needs four faerie fungi held in earnest by a Faerie gang. She grants Dan a Butterfly Net for trapping the foul-tongued rogues scattered about the forest. The successful apprehension of all four fairies, and the submission of the fungi, will grant Sir Dan passage to the tomb of the Shadow Demons.

Two fairies, Griff and Noreen, aid Dan in a quest to thwart Zarok's plan to destroy Gallowmere's militia at the Battle of Gallowmere. 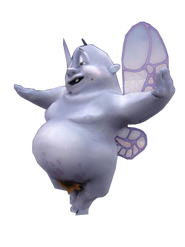 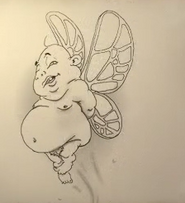