The Enchanted Earth
The Entrance Hall (PS4 remake only)

Dragon Toads are amphibians native to the Enchanted Earth in Gallowmere. They are likely descended from ancient dragons.[2] Licking their backs can induce madness in individuals.[2]

They also appear in the Entrance Hall as part of a quest given by the lost soul Sir Sloane.

Dragon Toads are creatures that spit acid at Daniel when approached. However, Daniel is immune to their spit while wearing the Dragon Armour. They can be easily smashed with a hammer or club.

In MediEvil: Resurrection, Dragon Toads yield a soul upon death. Instead of spitting acid, they spit fire balls at Daniel. They also bite Dan if he gets too close.

Dragon Toads don't appear in this area in the final game. 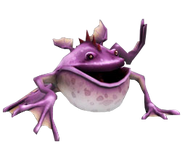 Retrieved from "https://gallowmere.fandom.com/wiki/Dragon_Toads?oldid=34469"
Community content is available under CC-BY-SA unless otherwise noted.