Dogman (died 1886) is one of Palethorn's henchmen along with Mander. He appears in MediEvil 2.

Dogman is a working class thug, employed for his strength and fierce disposition. Loyal to Palethorn out of stupidity rather than duty, he is exploited and bullied by Palethorn to do his bidding. As a side effect of the spell cast by Palethorn, he's mutated into a creature that reveals his primal nature: he grew a furry pelt and dog-like features. To complain to his master about this... would have meant certain death! He is motivated by greed and self-preservation, and supports Palethorn only because no-one else can offer him what he does - which, strangely enough, is relatively nothing.

Dogman is a dog-like humanoid. He has grey-brown fur and resembles a bulldog. He wears a red torn up jacket, a white shirt, orange pants and black shoes. His human form before his transformation also heavily resembled a canine.

Dogman is fierce and vicious but is noted to be very dumb, being the polar opposite of Mander. He does not speak much and usually barks like a dog. 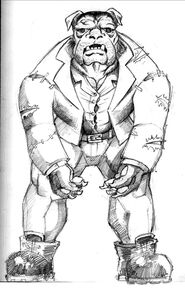 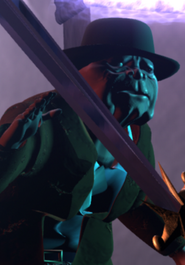 Dogman as a human.

Retrieved from "https://gallowmere.fandom.com/wiki/Dogman?oldid=35026"
Community content is available under CC-BY-SA unless otherwise noted.